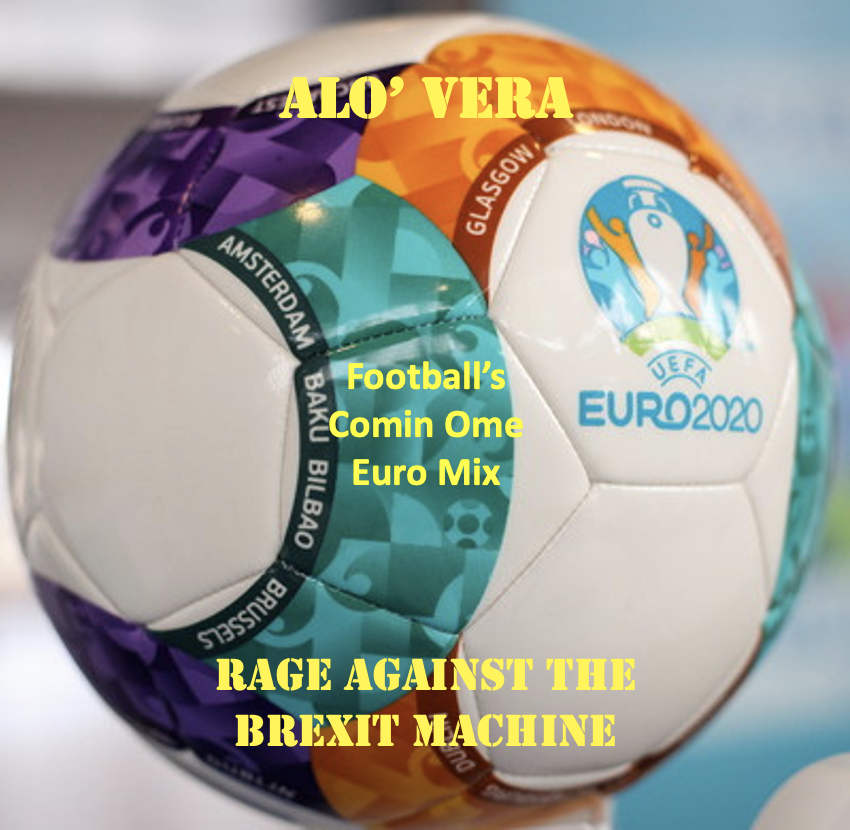 Brexit : they think it’s all over. But it’s far from done. As the COVID umbrella lifts, Brexit is beginning to show its ugly heads. And, in the vernacular of Priti Patel, it’s all kickin’ off on Saturday 12th June with the worldwide premiere of Rage Against The Brexit Machine’s new song Alo’ Vera – Football’s Comin’ ‘Ome Euro Mix.

Saturday marks the start of the Euros and an exclusive live performance of the song at Chesham to celebrate Rejoin EU’s campaign in Chesham and Amersham. As with the Eurovision song contest, it rather seems that Global Britain’s attitude to aid and trade will leave us with “nil points” when it comes to re-booting Britain.Having asked for extra time for the transition period to mask Brexit carnage, Johnson is now losing trillions of pounds on “penalties” and he no longer knows where the goal is. But has Britain got the legs? Or will it crash out of the Euros, and of being a serious player on the world economic pitch?

Rage Against The Brexit Machine (RATBM) aims for the Premiere League, lining up for a Number One on Friday June 18th. Alo’ Vera latest release in our Pop versus Populism series, a rousing football-inspired pop pathos marching tune. A match for any match, it’s a tale of what’s finally comin’ ‘ome, and it ain’t Priti Patel’s fruit pickin’ teams, the European Corona care nurses or the easiest deal in history.

“Brexit was a game of two halves … but now the players are off the pitch, we wonder whether we should be supporting another team?”

Alo’ Vera – Football’s Comin’ ‘Ome is the follow up to “The Brexit Party” album” – the party album to end all parties. This includes other Brexit classics, which we will be performing from 11.00 am in Chesham, an unlikely location for a worldwide song release!

• The unforgettable Bojo French sex anthem “Take Back Control”, a fusion of “Je T’Aime” and AC/DC.

• A poignant dance floor track called “In Limbo”. An epic project with 20 voices from all over Europe.

“Music reaches our heads, hearts and souls in ways that politicians only dream of. The art of protest just found its 21st century voice. Corona Crisis + Brexit Disaster = Britastrophe”.

For an exclusive interview on Rejoining the EU, contact me and we will arrange with the Rejoin party leader / candidate. 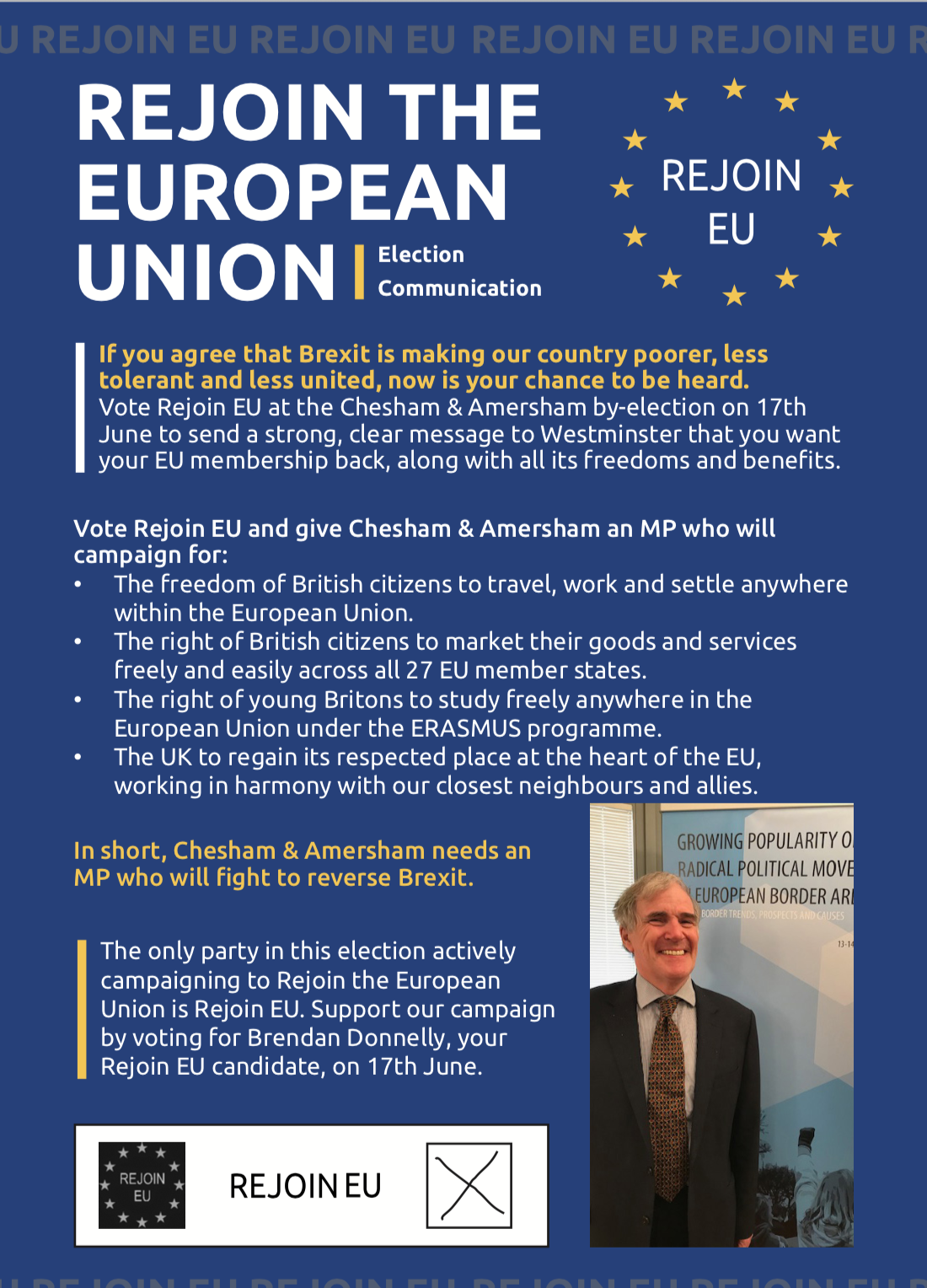 Please join us in Chesham/Amersham this weekend to support The Rejoin EU Party from 10 am each day and tbc Batley and Spen. The economic reasons to rejoin the EU are now so widely published, given the disasters that have unfolded for so many industries since Brexit day (the fishing industry, the farming industry, the finance industry, the entertainment industry, the list goes on!) that I do feel that for many of us on the Rejoin EU side of the argument it’s become low hanging fruit.

But let’s remind ourselves there are so many more reasons to be part of the European Union than the economic ones.

The EU has been the biggest and most successful peace project in history, taking a continent that has an almost non-stop history of war for two-and-a-half millenia and forging an unprecedented peace. Some will argue that this is a product of a higher level of civilisation we have now reached, and it would be simply unthinkable to go back to our warlike roots. But when you consider the speed with which Britain despatched its warships to a protest by small fishing boats recently, you have to wonder.

People of my generation (mid 50s) were also able to take advantage of educational, cultural and lifestyle choices within the EU unrivalled by any other generation in history. The Erasmus scheme (which the current government spitefully chose to jettison, even though we could have continued whilst being outside the EU) opened the door for hundreds of thousands of UK young people to travel the continent. Many of whom chose to go on and base their lives within the city of their choice only to have it cruelly ripped away from them with Brexit.

As for the UK itself, it now finds itself in an existential crisis with the future of Scotland and Northern  Ireland more uncertain than at any point in recent history.

And then there’s the science projects, the global environmental activism, the protection of food standards, the safeguards on dignity of lifestyle for those of us in the LGBTIQA+ community. All gone in a heartbeat, with total power over all our lives now in the hands of a hard right government with no obvious moral values (and I certainly don’t need to remind anyone where that can lead to).

So, to a question I often find myself turning to these days : “where is the opposition to this”?

When I was persuaded that establishing the Rejoin EU party as a registered political party as well as a pressure group was appropriate, I thought we’d spend more time supporting other opposition parties and their candidates then standing ourselves. We are pledged to provide a rejoin EU voice in any by election where one doesn’t otherwise exist.

In Scotland, that means very little work on our part. With the Scottish Greens and the SNP unashamedly arguing for our return to the top table, all our party has to do is be as supportive as possible.

Sadly, we don’t have the same options in English by elections. The Labour Party are calling on us to “embrace Brexit”, the Liberal Democrats have a leader who’s stated they are “not a rejoin party” and shows no sign of retracting this statement, whilst the Lib Dem conference supports only a “long term aim” of rejoining the EU (i.e. WON’T be giving voters that choice in the next general election) and the Green Party limit their discussions to rejoining the customs union.

Whilst many firm pro-EU advocates within these parties are trying hard to get stronger commitments, the collective narrative that “Brexit is done” becomes harder and harder to shift. Which is why we are lucky to have two amazing candidates in Brendan Donnelly for Chesham & Amersham and Andrew Smith for Batley & Spen in the upcoming by elections.

And even if, as Private Eye have phrased it so eloquently in the past, we end up as the only folks “sitting on the fruit cake stall” whilst the political mainstream ignore the issue so be it. I regularly ask myself, am I just crazy being the only one who can’t see the benefits of Brexit? Perhaps it’s part of the arrogance that comes with being a middle aged white dude, but in this instance, to quote Lily Allen, : “it’s not me, it’s you”. 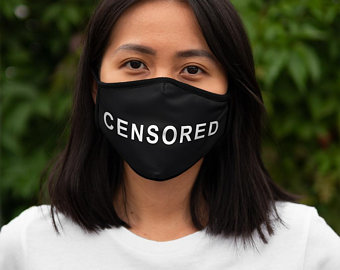 I need your help. Please write to YouTube. It’s not just for me. It’s about ALL of our rights to freedom of speech. As some of you will know I compose music and produce videos that speak truth to power on Brexit and our sleepwalk into fascism in Brexit Britain. I make no apology that some of them are “edgy”, reaching the parts that other people’s work do not. However, I do NOT use nudity, violence, drugs or pornography to make my point. As art reflects culture and our society slips deeper into sleaze, lies and cronyism, the means of my video production have followed this trend. It seems that I have upset the Conservative party and we believe that they set their bot farms on me recently. The result of this has been an outright ban of my material on YouTube. I use the site for my business activities as I don’t hide my day job from my activism. As a result I have lost some 15 years of work from the site with massive impact on my ability to continue working.

Please write to YouTube about the freedoms of speech issues that this raises (they only have a complaints channel so use that) and contact them on Twitter, Facebook, Linkedin and other social media channels. You will need this link to identify the channel https://www.youtube.com/channel/UCs79-V9-2F36d2hjti4-p0Q If not for me, for future generations who will lose their rights to speak about human wrongs. You can begin here with this Twitter thread. Please retweet the whole of it, add people who care and reply to the tweets. An algorithm caused this to happen and they need to see the other side of the story. At the moment, I am still talking to robots at YouTube and we must break through to a human being.

In case you are wondering about the “ITV Testicle”, here is the video “wot dun it”, with the testicle removed for Facebook:

Some good news. Here is the AC BC track that caused all the fuss. Download Whole Lotta Brexit to support our continuing work.

This is what I have already tried below. YouTube are extremely busy and so they use robots to make automated responses within minutes. It becomes clear that they don’t do any overall analysis of accounts during that time. We must reach a human being. My attack by Tory bot farms on YouTube is not just about the loss of a few satirical videos. All my business content over 15 years is there and this has effectively killed my business. Brexit really has broken my will to continue at this point.

Please help. In the words of The Manic Street Preachers: