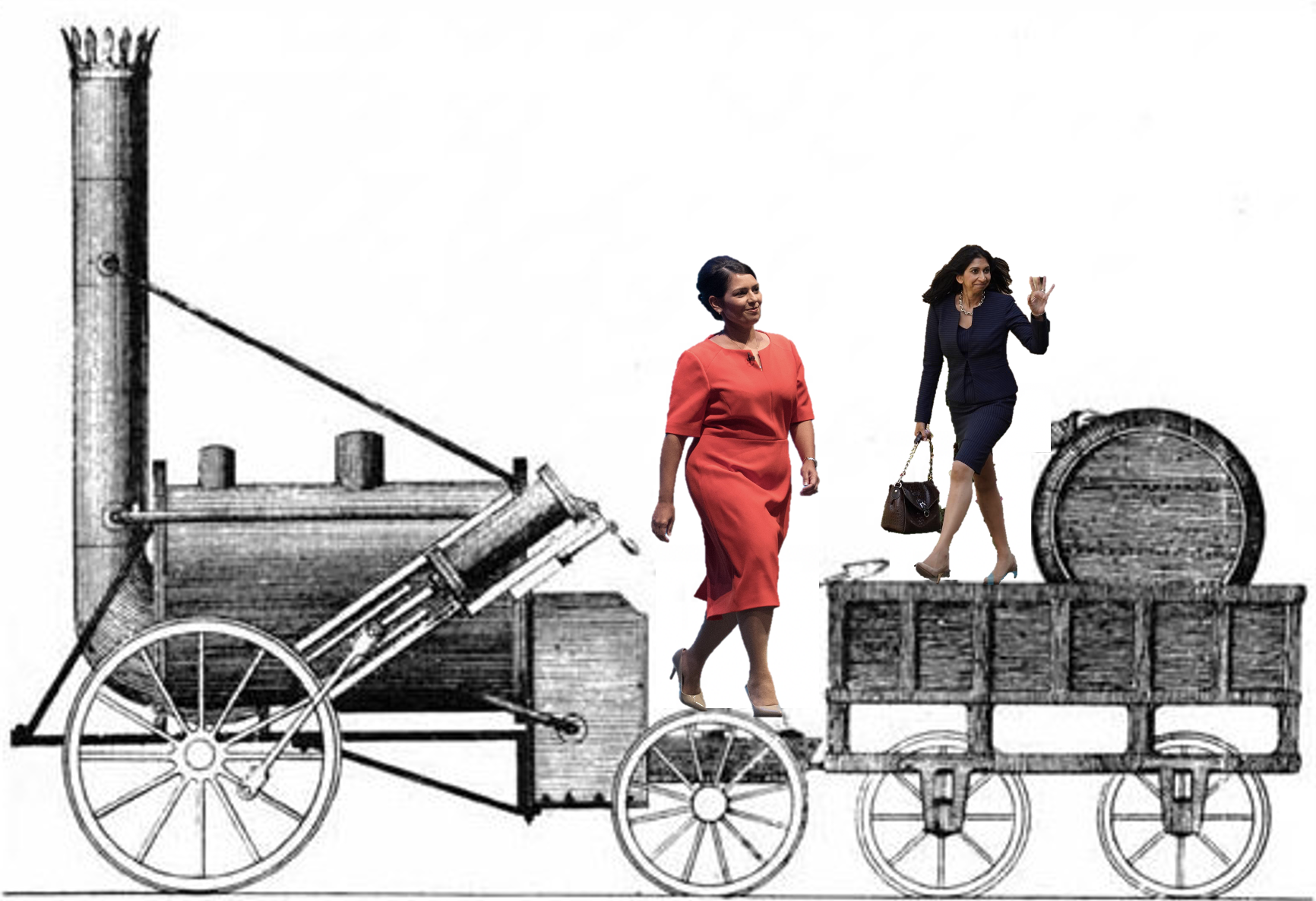 This from Don Adamson, once in Kent, now in Yorkshire, with some reflections on the march to Rejoin:

I arrived at the rendezvous at seven bells in the forenoon, that is 1130 for landlubbers and when the big hand is on the 6 and the little hand is on the 11 for Gammons and Flagshaggers. I took the last leg of the journey by underground. A charming young lady offered me her seat. I explained that I would be getting off in a couple of stops but it was nice of her to offer. I get a lot of that these days. I must be showing my age.

At the rendezvous I noticed about 30 motorcycle cops loitering. It was not clear to me how that would assist in the matter of crowd control. I found a park bench near the statue of the Duke of Wellington and ate my sandwich. The first thing I noticed was that we did not have the numbers that we used to have before lockdown. I assumed this was something to do with cancelling the September protest and rearranging another protest at short notice. Does this add substance that Thick Lizzie and her horrible friends assassinated HMQ?

I got to talking with a young man named Fouad (not his real name). He was British born but his parents took him to Qatar as a child from whence he had recently returned. He was concerned about events in the Middle East. Qatar’s economy was in trouble because of the country’s involvement in wars in the Horn of Africa and the region. He believed that young people were getting restless and pressure was building up for change. I hoped he was right. I reminded him that Lawrence of Arabia felt strongly that the post WW1 arrangements would cause endless trouble in the Middle East. That was still happening. Perhaps the Duke of Wellington’s greatest achievement was his involvement in the Treaty of Vienna (1816). From 1702 till 1815 there had been a succession of major wars in Europe. The Treaty of Vienna brought a century of relative peace to Europe. It was not a perfect peace (Crimea, Franco-Prussian War) but it was an improvement on the century preceding 1816.

The Treaty of Versailles (1919), by contrast, was a disaster. It practically guaranteed another terrible war barely 20 years later and, as stated above, the consequences in the Middle East rumble on. Do not underestimate the damage that incompetent politicians can do.

We set off at the appointed time. We chanted obscene slogans to the evident approval of the crowd. I saw the flags of Ireland, Scotland Wales, Cornwall, Devon and various European countries. A band planted the banner of the White Rose of York and bellowed out ‘Ilkley Moor bar t’hat.” I not sure what the anti Brexit connection might be but perhaps they wanted Londoners to know they were there. Some people carried banners demanded ‘Vote out Tory Scum.’ I mentioned that ‘Scum’ was took kind a word for Johnson, Thick Lizzie and their scumbag supporters. We turned down St James’ St past Davidoff’s. That is a cigar store that, the last time I checked, sold 18’ Cuban cigars at £1,000 a time. I shudder to think how much Cuban cigars cost nowadays. Then we went on to Trafalgar Square and down Whitehall. We made a lot of noise as we passed the entrance to Downing St.

A contingent of Gammons and Flagshaggers loitered outside the Red Lion and shouted abuse at their betters. I made it to Parliament Square. Cops had erected crowd barriers to prevent people from sitting on the walls. I can walk for miles but standing around plays havoc with my old knee injuries. I hung around for about an hour then headed for Victoria Station. According to the cops and the neo Nazi newspapers the crowd numbered about 10,000 people. The organisers counted 50,000. Thick Lizzie has gone and been replaced by the robber baron capitalist who was partly responsible for the 2008 financial crash. Thanks, Tories.

The Brexit Balderdash Conspiracy and other TV broadcasters made no mention of the protest but they did cover the Hero’s welcome Johnson got at the airport. They made no mention of the sneers, jeers and booing when the other passengers on the aircraft learned that Johnson was on board. Apparently Johnson heard Gammons and Flagshaggers singing ‘Will ye no’ come back again.’ Johnson had returned to get his old job back and replace Thick Lizzie. Something tells me that not all Scottish people would approve of Gammons and Flagshaggers singing a Jacobite sing. Johnson has since decided that the time was not right to attempt a return to politics.

Any excuse to visit Rohan is a good excuse. He is a little bit further on every time we see him. He knows more words; most of them to give orders to his parents and other willing slaves. When Jim was learning to play football I had him outclassed, at first, but that did not last. James had me outclassed at an even earlier stage. William runs me ragged. I shudder to think what Rohan will do to me when he is a bit older and I am even more decrepit than I am now. It was wonderful to see Rohan. It would be nice to see more of all my grandchildren.

The journey home was interesting. Traffic tends to be heavy on a Sunday afternoon and that weekend was no different. We had minor delays, nothing to get worked up about but tiresome just the same. The M62 is not my favourite stretch of road at the best of times. There seems to be some kind of technological black hole around here that confuses our Satnav. We spent a lot of time wandering around South Bradford before we finally got home. For all that it was a good weekend. We do not see enough of Rohan and his parents.

I have said before that when Management Consultants are good they are very good. The bad ones are dire. Robert Townsend believed that the one person consultancies are the best but the large, bureaucratic consultancies are a menace. The South African Government called in a consultancy to modernise their tax and revenue raising. It was disastrous. The consultancy goes by the name of Bain. I had the misfortune to have a South African called Bain p******g in my soup. He imagined himself to be a financial and commercial genius; despite all the evidence to the contrary. He was forever meddling in matters that were not his responsibility and which he was too thick to understand. In fact he was so thick he did not get it even when the issues were explained to him (carefully and in words of one syllable). His masterpiece was when he demanded that I put the organisation’s pension and medical insurance into a Ponzi. He was a commercial and financial genius who did not recognise a Ponzi scheme when he saw one. I wonder if he is at all connected with the Consultancy that did so much damage to the SARC.

Warmth tip for the winter: You lose a lot of heat through your mattress. Spread you summer weight duvet over the mattress, fit your sheet over that and put your winter weight duvet on top. It warms things up nicely.