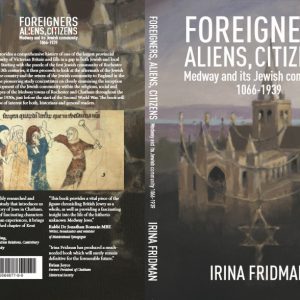 Irina Fridman is author of “Foreigners, Aliens, Citizens“, a book that charts the settlement of Jewish people in Medway. It provides lessons for anyone that is on the “outside” of convention in terms of xenophobia, hatred and racism.

The book provides a comprehensive history of one of the largest provincial Jewish communities of Victorian Britain and fills in a gap in both Jewish and local historiography. Starting with the puzzle of the first Jewish community of Rochester in the 12th and 13th centuries, it then proceeds to the aftermath of the Jewish expulsion from the country and the return of the Jewish community to England in the 17th century. This pioneering study concentrates on closely examining the inception and the development of the Jewish community within the religious, social and political landscapes of the Medway towns of Rochester and Chatham throughout the centuries, until the 1930s, just before the Second World War.

To understand the present one need to look at the past. It requires not simply to look, but to reflect about it and learn from it – the past, where equal voices of the minorities are heard and acknowledged, and their experiences are respected. If one is interested in racial relations, then this is what this book is about, based on a case study of a Jewish community, the first non-Christian community in the country. If one believes in equality, you’ll be surprised to find that so much of the language exploited in the past is being used today. If one is interested in education, then this book provides plenty of examples to learn from in order not to fall prey to demagogues and not to repeat the horrific narratives. If one wants to understand why the Brexit vote happened – this book is the one to read.

We interviewed Irina as part of Futurama – The Festival of Brexit. Watch the video filmed here:

Get your copy of “Foreigners, Aliens, Citizens” on Amazon. If you only have a minute, here is a short description of the book:

2 thoughts on “Citizens of Nowhere”