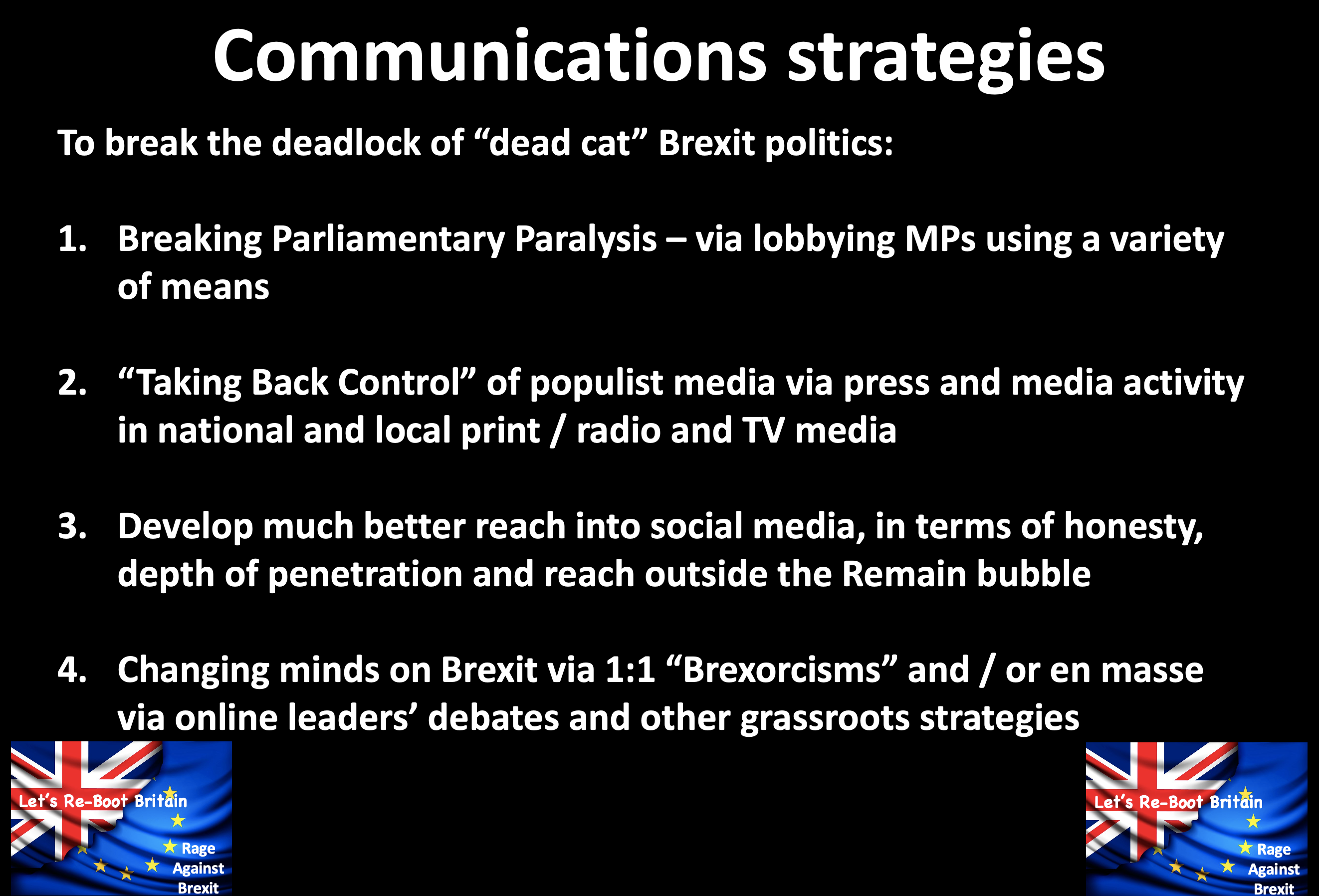 I have taken a break over the last few months to reconsider my pro-EU and anti-Brexit activities. I have concluded that, whilst my full-time commitment to this cause is unsustainable, it remains valuable, important and impossible to escape from. What would I tell my children if I did not continue to face up to the greatest disaster for Britain across several centuries? However, things need to change and I propose the following improvements for 2022:

We need a proper organisation rather than another Remain hobby group. I have managed most of the functions of Re-Boot Britain entirely on my own up till now and this has damaged my ability deal with other priorities. To this end, I will only continue once we have appointed a board with most of the functions needed to sustain a professional organisation, in other words finance, administration, outreach, social media and so on.

To this end, I propose that we hold a meeting to discuss this on Monday January 31st at 8:00 PM via ZOOM, where we can discuss the formation have a professional organisation, so that we can deliver on the priorities we set ourselves when I formed Re-Boot Britain in 2020. We have four principal objectives and these are listed below:

The different objectives lend themselves to some of the capabilities that we have developed over the last few years with the circle of around 100 people and a wider outer circle:

Our Lobbying objective requires people with high level advocacy skills delivered via a variety of media : Face to face discussions, letters, petitions and other means of moving opinions with movers and shakers on all sides of the political spectrum.

Media activity requires people who are skilled at securing newsworthy inputs across the different platforms. Getting pictures in the Guardian as a backdrop is not sufficient in order to get the message out. Nor frankly is citizen journalism unless it is amplified to levels that cut through and reach outside the bubble.

Our social media amplification team is something that all can contribute towards, as it is home based, can fit the time that people have and so on. We have been quite successful already in this area with our ABV (Anti-Brexit Virus) amplifier groups but can do more, especially outside the Remain / Rejoin bubble.

The solid work to change individual minds requires time, patience and considerable skill. This is why I wrote a book to help people practice the art of difficult conversations about Brexit and the European Union. Read the book and join me in a masterclass.

At the same time, high level discussions continue with other pro-European groups that feel the need to come together to offer something much better than what we currently have. If a better organisation for our collective efforts emerges then I will be prepared to merge with that, rather than persisting with more and more silos in our movement. It is time that we join forces in pursuit of a better Britain in a better Europe for a better World. 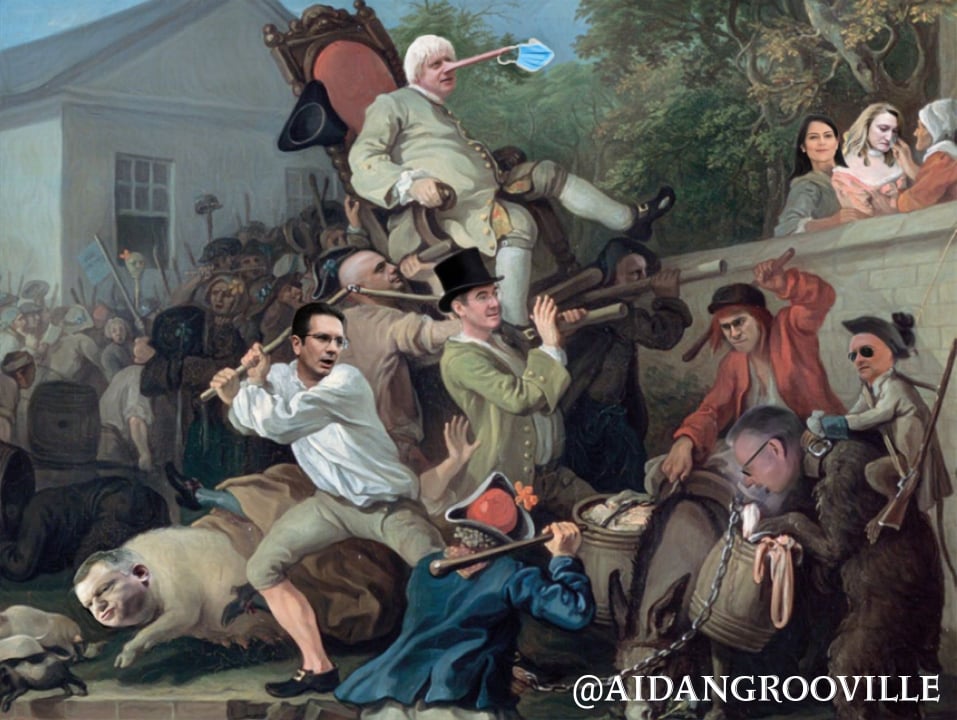 I never thought I’d be able to say that Brexit had failed so quickly, as we supposedly ended up with a Brexit deal rather than “WTO, way to go”. But, already we are seeing the “hors d’ouevre” of Brexit. I have summarised just some of the early impacts, as Brexit reality meets satire. This is a long post so hold on to your butts.

It seems that the British people are fed up with Brexit – A recent report from The Guardian stated that Britons do not want continuous negotiations with the EU over Brexit. This failure to understand the complexities of international trade and co-operation infected the Brexit debate and it will not go away just because people wish it. In the words of some leave voters, Brits had better “get used to it”, especially as the obstacles to progress continue to come from the UK in the main. For example David Frost’s repeated demands to cancel the Brexit agreement which he signed. Such things simply frustrate the prospects of making the relationship work and it is plain that Brussels and the 27 states are getting tired of our repeated sabre rattling, done only to create the impression that Britannia rules the waves. Hotel California seems to describe Brexit well, as we keep wanting to change aspects of an agreement that we signed in haste so that Johnson could claim that Brexit was out of the oven.

Liz Truss’ much spun trade deal with Australia is worth just £1 per person per year. How will you spend it? A pack of Tim Tams perhaps? Against that backdrop, The National Farmer’s Union reports that the Australian Trade Deal will break British farming. Listen to Farming Today on Radio 4 which should now be renamed Brexit Carnage Today.

In another massive climbdown from the promises of Brexit, hidden from view by COVID, Johnson’s Government has just agreed to accept jurisdiction from The European Court of Justice (ECJ). This was one of the cornerstones of Brexit – if you remember the idea of “taking back control” of our laws and so on. So far we have not taken back control of our borders either and we already had our own currency.

Frosty the No Man

Lord David Frost has just run scared from his role as Brexit negotiator, just ahead of January 1st 2021 when the grace period ends and we commence full customs checks and tariffs on imports and exports to the EU. This is expected to add on average an eye watering 11% to costs of goods entering the UK and will further exacerbate the near 5% inflation that is predicted for 2022 in the UK. This follows 4.2% inflation in 2021, an unprecedented figure with a major contribution from Brexit. Our predictions of stagflation are gradually coming true.

This twitter thread explains the carnage to come in January better than I can:

Ryanair have just abandoned the London Stock Exchange in preparation for Brexit. Expect more of this as Brexit Britain melts down.

Trussed up on Brexit Bollocks

Liz Truss has been lined up to succeed David Frost. Perhaps this an attempt by Johnson to ensure that “The Truss” does not manage to launch a leadership challenge, after all Brexit has already consumed five ministers. Or, perhaps it is intended to demonstrate the impossibility of Brexit due to Liz’s unprecedented levels of incompetence. Nonetheless, the DUP see Liz as an easy touch and have already begun to lobby her to invoke Article 16 and threaten peace and stability in Northern Ireland. Nice people! See Trussed up

In the months after Boris Johnson signed his post-Brexit trade deal with the European Union, COVID masked the economic damage of leaving the bloc. As the pandemic drags on, the cost is becoming clearer and voters are noticing. Goods trade with the EU was 15.7% lower to October 2018, in line with HM Government predictions.
The article above shows that Brexit has been a drag on growth. It brought new red tape on commerce between Britain and its largest and closest market, and removed a large pool of EU labour from the country on which many businesses had come to rely. The combination has exacerbated supply chain shortages, stoked inflation and hampered trade. In March 2020 I coined the phrase Britastrophe to describe the toxic combination of Corona crisis + Brexit disaster. It has literally allowed Johnson to mask Brexit:

Still Johnson continues with distraction, dither and delay. This costs lives. I predict a new round of clapping soon …. What shortages did I miss?

Killing in the name of Brexit

Brexit ideology kills. Plain and simple. Write to your MP to tell them.

So, here it is, merry Brexmas, everybody’s having fun. Look to the future. It’s only just begun …