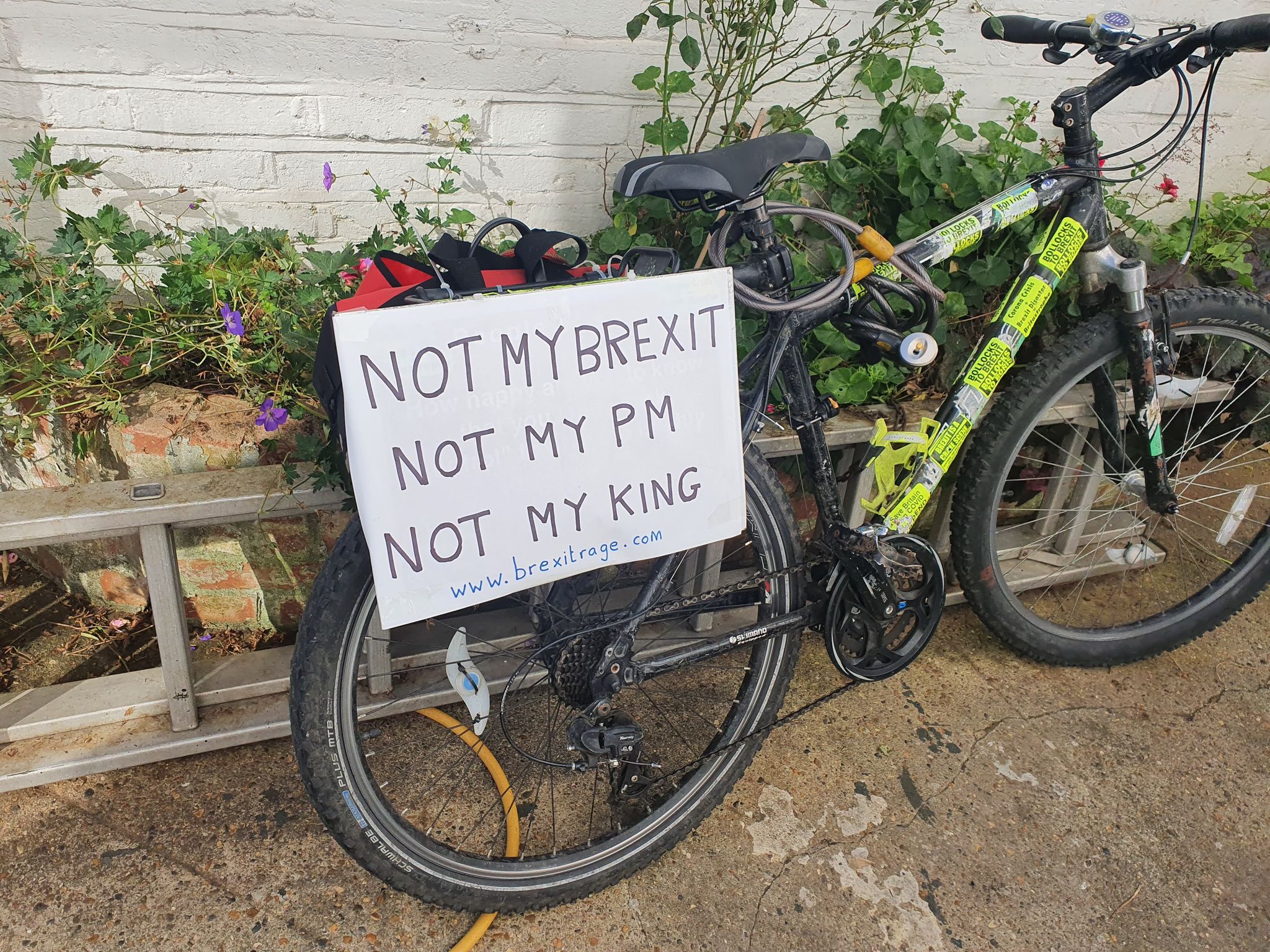 Cowards of the Country

I try everyday to engage members of the population in a dialogue about Brexit, what I call Brexorcism. Today’s intervention was not a dialogue but I thought it both funny and incredibly sad at the same time.

I had stopped at a cafe en route home from Maidstone on my bicycle, which has signage as a ‘conversation starter’ for people who wish to discuss Brexit and the European Union with me. In over 90% of cases, this is a hugely positive strategy, opening up the conversation anew in what was a hugely Brexity area of the country. In the last three months, I have not had one instance of pushback on Brexit. Buyer’s remorse has set in, in a very big way. Most people do not however believe there is a way back from our unique act of self-harm.

Sitting outside the cafe with my tea, I had noticed that two builders had observed my bicycle and the signage out of my peripheral vision. I decided to let them be, as it is always better to let my subjects approach me than the other way round.

Of course, I listened into their conversation whilst drinking my tea. Over the course of 15 minutes, one builder aimed to persuade the other that he should now retire and enjoy life. This was based on a longer discussion that business had collapsed in the last 6 months and lots of complaints about the escalating cost of building materials (this, of course, is a direct effect of Brexit and has been happening steadily over the last year or so). I packed my things up and cycled down the road. A few minutes later, they passed me in their truck and one of them shouted “wanker” out of the window. Clearly angered by the decline of their businesses due to Brexit, they chose to strike out at someone who could have helped their situation rather than the Government. This ‘blame game’ is typical of the few remaining Brexiteers. I repeat that, in the last three months of cycling around Kent with such things on my back or on my bicycle, I have not experienced a single piece of pushback from the public, quite the opposite in fact. I have had to work quite hard to explain that Brexit can be reversed, albeit with some difficulty.

Quite clearly, the will of the people has changed on Brexit, based on literally hundreds of miles travelled and conversations had. What has NOT changed is the belief that Brexit can somehow be undone. This is why I wrote the manual on Brexorcism and the Brexit satire book, to reach outside the bubble. We will not succeed at reversing Brexit without working on the masses. Placing hope in demographic change is simply laziness. Check the books out on ETSY. They make excellent Christmas gifts for tired Remainers or Brexiteers in regret.

Turn despair into action. Join us every Wednesday at 8pm on ZOOM via Reboot Britain.

SUPPORT our work via Patreon, Paypal or GoFundMe. We work 24/7/365 on a suite of projects and need your help to keep going.

Read recent articles : Reflections on the Queen, Irish Unity, God Save The Queen.