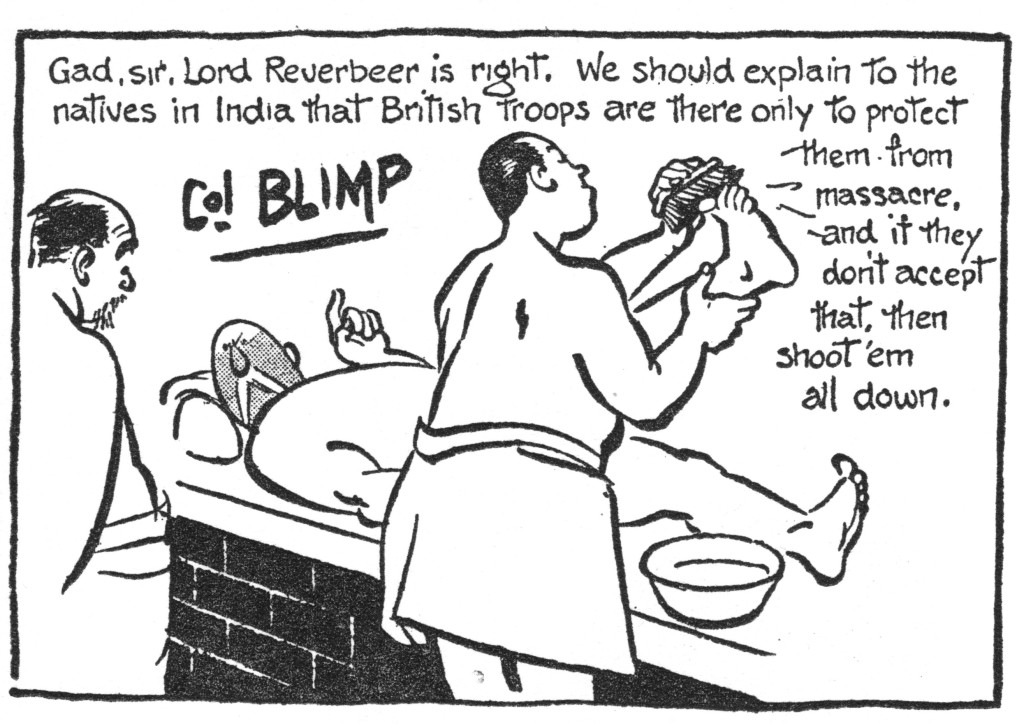 From one of our stalwart campaigners Don Adamson.

Lieutenant General Sir Aylmer Hunter-Weston was reckoned to be the most incompetent British general of WW1. In the 1920s he wrote letters to the editor of “The Morning Post.” This was a rag of such right wing views that it made “The Daily Telegraph” read like “The Daily Worker”. These letters were offensive even by Morning Post standards. David Low produced a series of cartoons for “Evening Standard” that satirised Hunter-Weston. Try as Low might, his cartoons never quite captured the true awfulness of Hunter-Weston’s letters.

N.B. the Evening Standard was owned by Lord Beaverbrook, an associate of Churchill and who was not exactly a drippy liberal.

“The Life and Death of Colonel Blimp” was a movie that came out in 1943. Roger Livesey played Clive Candy who was supposed to be a version of Colonel Blimp. The resemblance to Hunter-Weston was superficial to say the least. Clive Candy was as decent a person as you could ever hope to meet. Churchill wanted the movie banned, all copies destroyed and everybody involved in the making of it banged up in the Tower of London. The movie was about two army officers, one British and one German. They met at the beginning of the 20th century and after some initial misunderstandings they became the best of the friends. That friendship endured despite the ups and downs of two world wars. They fell in love with the same woman. She married the German but that was not what made the movie controversial.It all boils down to one scene. Clive Candy said he would rather lose a war than win it by dishonourable means. Churchill was incandescent with anger. This was during the continuance of the Royal Air Force Area Bombing strategy that involved bombing civilian targets, causing large numbers of casualties, with no possibility of damaging the Nazi war effort.

Nearly 80 years later this is still a controversial question and reckoned to be a stain on Churchill’s reputation. It would seem that even in 1943 Churchill realised that the area bombing strategy was flawed. On Social Media you may come across a certain “Sir Michael Take.” He is a cheerleader for Brexit and Boris Johnson generally. It is intended as satire but somehow does not quite capture the true awfulness of the original. He reminds me of David Low’s cartoons. The clue is in the name: “Sir Michael Take” = taking the mickey.

19You, Judith Spencer, Alan Bullion and 16 others2 Comments1 ShareLikeCommentShare