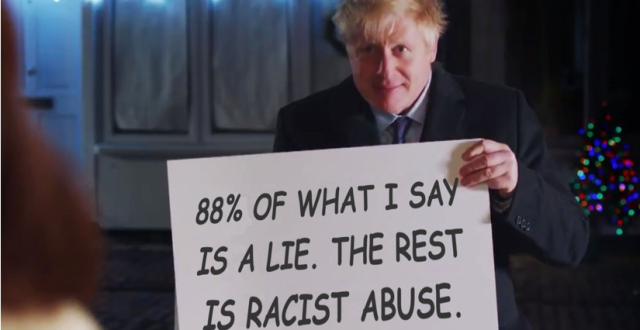 Our Tunbridge Wells correspondent, formerly a staunch Tory supporter, reports from the G7 summit in Biarritz, France this time last year where Boris Johnson began his career as British prime minister on the international stage with a lie which was massive even by his standards. On 26 July 2019 he said:

“We asked the people to vote on whether to stay in or out of the EU.  They voted overwhelmingly, they voted substantially to leave by a big majority”

That’s NOT substantial, overwhelming or big.

By comparison the amount to remain in the 1975 referendum was 34.5%. That was substantial, overwhelming and big.

Write to your MP to demand honesty in politics and the removal of liars. Use Adrian’s article to help you.

Johnson further discredited our country’s reputation for honesty and reliability  when, having reached an agreement with the EU on fundamental principles for our future trading relationship, he went back on his word after the 2019 election on the key issue of a level playing field  As matters stand today, this issue may well result in “No Deal” with the EU which, combined with coronavirus, can only result in total “Britastrophe“.