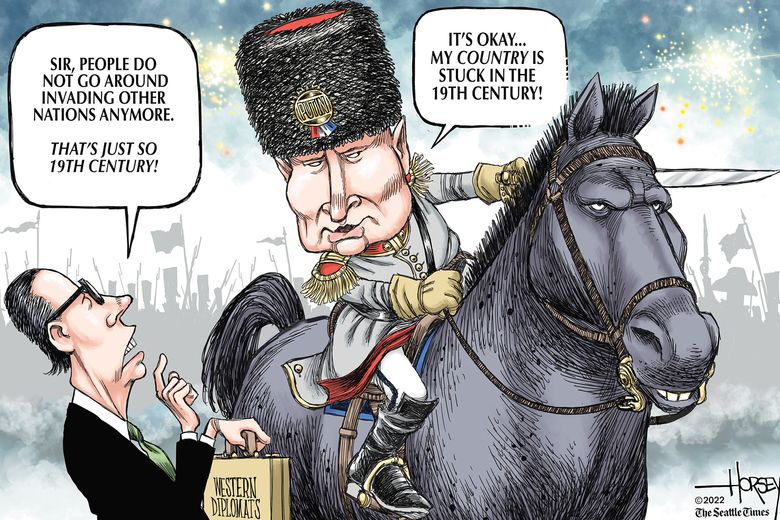 An analysis of Putin Power Plays by Gary Honey.

Events of the last week have shown that forecasts can be wrong, however we have learnt that Putin is determined to remove Zelensky and install a puppet regime in Ukraine. Such is his determination that direct conflict with the EU or NATO seems more like ‘when’ not ‘if’ with escalation unavoidable. There are a couple of things that could de-escalate current tensions and I discuss them below by the names given by others: The Palace Coup and The Chinese gambit:

The Palace coup – envisages Putin being removed by Russian politicians who consider his attempt to subjugate Ukraine is damaging Russia as a credible world power. He has an inner circle of eight ‘securocrat’ officers or Siloviki, profiled by Paul Kirby on the BBC website – with no evident dissent among them. He also has a 30-member security council that unanimously endorsed his decision to invade Ukraine and was televised doing so. Finally, he has a lower house of 409 Russian MPs all of whom supported the vote to restrict news reporting to the state broadcaster. No objections or abstentions on that vote televised yesterday.

Any political opposition is either in jail like Alexei Navalny or already murdered like Boris Nemtsov, so it is fair to say that after 23 years in power Putin is as secure from defenestration as Stalin was right up his death on 5 March 1953, exactly 69 years ago.

The Chinese gambit envisages Putin being offered a face-saving exit or ‘exit ramp’ by a third party he respects. At the moment Putin is only likely to halt his armies if President Xi Jinping suggests it or offers to mediate a peace deal with NATO. Putin has shown that he will listen to other leaders like President Macron of France but rejects any request to halt his military advance on humanitarian grounds.

Threats from the United Nations carry no weight because it is headquartered in New York, and because Russia has a veto as one of the five permanent members of the UN security council.

Putin would not recognise President Biden as an independent mediator, he believes the US is still his greatest adversary. Although he respects the US military arsenal, he suspects Biden is reluctant to get involved in any new European war. He’s happy to provoke NATO but not yet attack a member.

Putin agreed to delay his invasion until the Peking games concluded on 20 February so as not to distract media attention away from the games. If Xi could extract some advantage he would step in as a mediator, but the longer the war goes on the more he learns about the West’s resolve.

History shows that a tyrant or despot usually meets a violent end, either at the hands of his own people or at the hands of his enemies. For now, the West, or liberal democracy, must balance two distinct risks – the risk of action versus the risk of inaction. See also Action on Ukraine. As well as Gary’s fine analysis of Putin Power Plays, we must also consider disruptive interventions such as the surgical removal of Putin or a gradual realisation on the part of the West that inaction may well lead to World War III. Here are Garry’s 10 lessons from the first 10 days of Putin Power Plays:

1.The Ukrainian people resolutely do not want to be liberated by Russians.

2.NATO and the EU have been played by Putin for years and woken up to it too late.

3.Putin is prepared to use brutality in Ukraine as he did in Grosny and Aleppo.

4.Counter-action is needed but fear of escalation results only in paralysing inaction.

6.Putin didn’t just want Ukraine to keep out of NATO, he wanted subjugation.

7.Rolling up other former soviet domains will inevitably mean conflict with NATO.

8.The UN was created in 1945 by world leaders who had experienced Hiroshima.

9.Those, like Gordon Brown, who have dealt with Putin say he only respects force.

10. China will only step in if Chinese citizens stuck in Kyev are endangered.

Surgical removal may just mean another of the inner Securocrat or Security Council members steps in to continue the barrage on Ukraine and possibly further.
Inaction by NATO to implement a no fly zone also seems at odds with the reality of the situation.
The bit about the Beijing Olympics is interesting, but how could President Zu be convinced to stick China’s neck out for the sake of the West?
And what of the destabilisation of Europe’s western flank, which started long before Brexit was a hot topic? Was that just a distraction, to keep European eyes looking westwards while to Europe’s east, shenanigans were in play?
It appears Russian control and command lines to its troops on the ground in Ukraine are shaky at best, and the tabletop chats with Aeroflot employees are not what they seem to be… Unless every transmission contains codes orders to various Russian-controlled military units…
That the UK shows huge monetary values of sanctions, but less than perhaps 30 individuals targeted, says more for how successfully the Russian dictator has inveigled himself into the British Cabinet and Government – 30 days’ notice is so all the Tory recipients of Russian donations, in a numbered Dollar or Euro or Sterling account in a Russian bank (no doubt!) can extricate their ill-gotten gains to the relative safety of offshore British Dependent Territories, isn’t it?
Meanwhile, a war and movement of people (women and children, mainly, note!) the likes of which has not been seen in Europe for decades is happening – and nobody seems willing to lift a finger to help stop the cause.
World War III, yes, it does look that way.

Read The Book of Brexorcism : Let’s Talk About Brexit

Listen to the Music : Rage Against The Brexit Machine