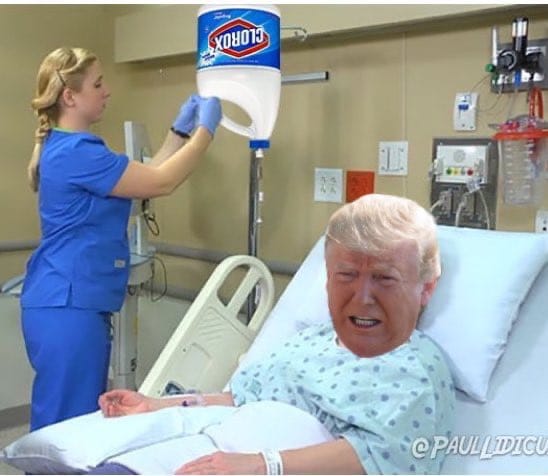 To Trump or Not to Trump

I am grateful to Cheryl Noti, New Jersey, USA for writing this excellent reflection on a troublesome conundrum of binary politics which seems to bedevil the world on both sides of the Atlantic.

We here in America are 33 days away from Election Day, 2020. Not normally significant, except for the fact the country seems to be made up of either those who hate Trump and will vote for anyone else, including a chimpanzee, or those who see Trump as the only real option to Make America Great Again.

There is NO in between.

Editor’s note: It is the same here in Britain with a two horse race between Johnson and Corbyn. Johnson and Brexit did not exactly win, but Corbyn and Brexit apathy lost. Now we live with the consequences.

2020, a year not to be repeated, has brought raging wildfires, hurricanes, flooding, a major pandemic that crippled the economy and forced us to wear masks and live like hermits, the race centric BLM movement, and last but not least the icing on the cake, an election with no real choice.

I, and others like me, have a difficult decision. Do we vote for the self-proclaimed bully, or the creepy old Grandpa who has seen better days?

With all the lies being flung and a media full of forked-tongued devils, it really is a tough call.

Four months ago, if asked would I vote for Trump, the answer would have been NO Way, NO How! His constant tweeting and childish behavior left me wondering could we stand another four years of this man?

As a registered Independent, with no allegiance to either party, I had pretty much bought into the mainstream media rhetoric and thought the choice was an easy one, simply vote along democratic party lines.

Things however changed when I became a “COVID 19 Hermit” with plenty of time to do some fact checking on both parties.  And what I found just did not add up.

I, like many others considered to be “The Silent Majority”,  those who refuse to buy into the BLM movement, and believe in supporting the police and military, have found ourselves questioning whether Trump could really be as bad as the mainstream media makes him out to be?

The media blamed everything on Trump including the COVID 19 virus. Silly me, I thought that was a China mess up. Well, if the media said it, then gosh it must be true!

Editor’s note: As a scientist, I would point out that Trump’s knowledge on science and the nature of wicked problems don’t impress me much. Regardless of the origins of COVID, the outcome of any situation is the result of leaders’ responses to the challenge. Both Trump and Johnson have undoubtedly contributed to many thousands of unnecessary deaths through their laissez faire approaches and scant disregard for experts:

The problem for me, however, was the facts did not match the rhetoric. Trump was being praised by the Democratic governors in the Northeast, the center of the pandemic, for the outstanding job he and his administration did, yet the media mouthpieces still said he was doing a horrible job.

The left and the media even went so far as to call Trump a Xenophobe and racist for closing the border to China.

Then the whole left back BLM movement and the media coverage really made me wonder if everything being said about Trump was a lie.

As the BLM movement and the so called “peaceful protesters” were burning cities across the U.S.,  tearing down statues and demanding we get rid of Aunt Jemima, the racist pancake syrup, the media continued to say these were all peaceful protests and again blamed Trump.

It seemed to me that the blame belonged with the radical left and the states and cities. What I, and others like me, began to see is a carefully-architected plan by the left to discredit Trump and his party.

They blamed Trump for stirring up the racial unrest and causing carnage, when in fact, it appeared the opposite was true. It appeared the left had unleashed a monster in BLM and was now unable or unwilling to control the problem.

As the rioting continued, I had to ask myself why wasn’t anyone stopping this? And why did the media and the Democratic party keep saying these were peaceful protesters? I saw with my own eyes the devastation occurring in NYC and Philadelphia. These were not peaceful protesters, and it was no longer about George Floyd, the man killed in Minneapolis, at the hands of the police. Something more sinister was going on.

I had to question how if we were such a racist country did Obama, a black man, get voted in as President not once, but for two terms? And why hadn’t Obama in his eight years and Biden in his 47 years in office done anything to end this systemic racism?

Editor’s note: I completely resonate on this point. It is said that Obama could not touch the issue as the first black President. Over here we have politicians now running scared from Brexit and outright racism as the far right take over our politics. Someone must stand up.

Something else did not add up. Where was all the money coming from to fund these riots? They were not grass roots. Instead, paid anarchists were being bussed from city to city to wreak havoc and burn down American cities. And why was the left not decrying the destruction of our cities? They seemed to be cheering these anarchists on.

Wow, could I get behind a party that did not believe in law and order? This was so not the party my parents supported. It seemed to have moved so far off center that the party was now being called the party of the radical left and their supporters were referred to as the “Libotards”.

Seemed like the mainstream media was not really telling us the truth about anything. I felt like a sheep going to slaughter.

To Trump or Not to Trump? All indicators seem to be pointing to the right, but to be fair to all involved, I need to wait and see the debates before casting my vote.

I sit here knowing my last thread of hope for any clarity will come from the soon-to-be televised presidential debates. Would I be swayed by smooth-talking Joe Biden, or would I become a member of the “Silent Majority” who supported Trump and believed in law and order? Only time will tell.

Editor’s notes: This post perfectly sums up the dilemma of voters confounded by fake news on all sides of political debates and the terror of being caught in a binary trap of A or B, Black, or White, On or Off, Yes or No etc. when most issues in life are analogue rather than digital in nature. We need total reform of our politics and political systems and this is why I started Re-Boot Britain. We will have some exciting news on this front shortly. Meanwhile:

Ask your MP to act to suspend Brexit on Monday

Oh yes, and listen to Lou Reed for some home truths from NYC:

Read the latest article from Re-Boot Britain - Rage Against The Brexit Machine https://brexitrage.com/shock-and-awe/

In response to all the excellent advice to grow our own vegetables, I have started an allotment. The beetroot is a little stunted though, perhaps it is a dwarf variety?

@MattHancock @PrueLeith Will Prue be making these Brexit meals for the famine?