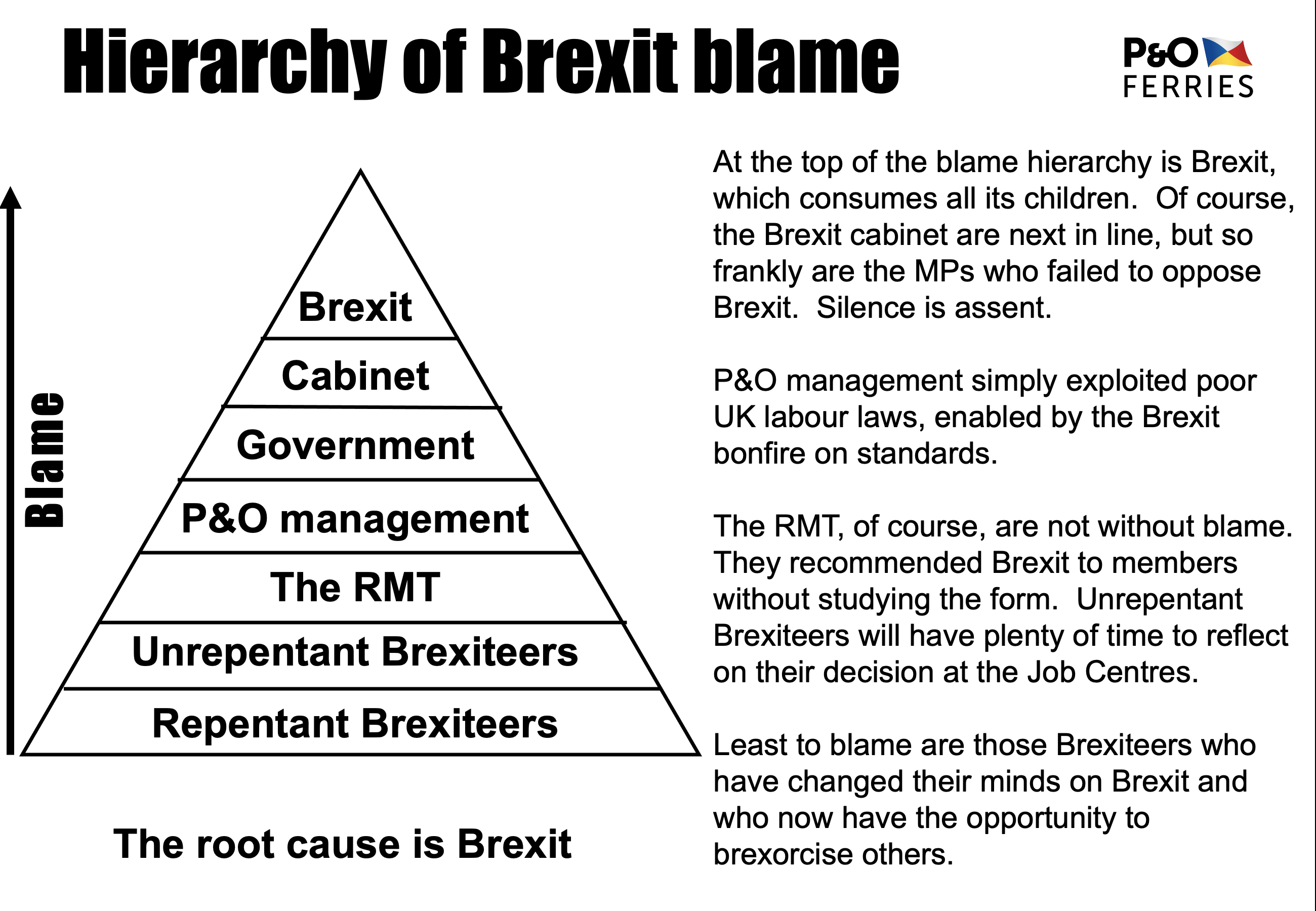 This is an extract from our forthcoming book on Brexit, making the links between Brexit and P&O Ferries crisis. Pre-order our book by mailing us at peter@academy-of-rock.co.uk

P&O Ferries’ employees have just had their first taste of Brexit freedoms as I write this book.  800 P&O Ferries’ staff have just been fired without notice via Zoom, with their jobs going to overseas workers, in a race to the bottom on wages and employment rights.  Natalie Elphicke, MP for Dover, was on the front line with the RMT union, crying crocodile tears for the workers, presumably en-route to visit her husband in prison … Natalie forgot to mention that she helped to block a potential new law in October 2021, which would have curbed employers’ ability fire UK employees without notice or rights, informed by our Brexit bonfire on standards.  In case of doubt, P&O Ferries have not been able to adopt the same policies in France and The Netherlands, due to better employment standards in their own countries and, of course, EU directives.  Damn that EU – protecting workers rights!  So much for Brexit providing British jobs for British workers and so on.  MP Chris Grayling recently changed the law which allowed P&O to do this.

Join us at Re-Boot Britain Monday at 8 pm via ZOOM – link here : Rage Against The Brexit Machine

Alongside our Natalie, the RMT union are also united in grief about the move when, in fact, they advised their workers to vote for Brexit in 2016.  For the avoidance of doubt, here is the statement the RMT put to their membership, to help swing the Brexit vote.  The RMT are far from being the only union to have been succoured in by the Brexit illusions, mainly due to a dislike of free market economics, faux sovereignty and nationalism.  Here is the RMT’s statement in full, from 2016:

The Book of Brexorcism : Let’s Talk About Brexit

Support our work via Go Fund Me

The RMT find themselves in the rather awkward position of being complicit.  So, frankly, are the employees who voted for Brexit and still believe in the sunlit uplands.  Still, quite literally, this group now have their freedom … from jobs and a livelihood.  People are calling for the law on fire and rehire to be amended and, of course, it is hard to argue against this as being a good thing.  But the root cause of the mess is Brexit and a ‘patch up job’ misses the underlying malaise.  It is always a mistake to treat symptoms and not deal with the causes of problems.  We will see many more examples of the ‘unintended consequences of Brexit’ in the coming months and years.

I do feel sorry for the employees, especially those who voted Remain, next, those who were taken in by the slick Brexit lies and now regret their decision and are prepared to say it out loud.  I’m finding it difficult to be concerned about the small hardcore Brexiteer group of P&O employees and trade union ideologues who remain (sic) resolute that Brexit is a good idea, despite losing their jobs.  This is an act of self-harm.

We can envisage a new Maslow styled hierarchy of Brexit blame. Of course our Government are trying to blame the P&O boss. Although guilty, he is simply exploiting Brexit freedoms. Brexit and P&O Ferries are intimately linked.