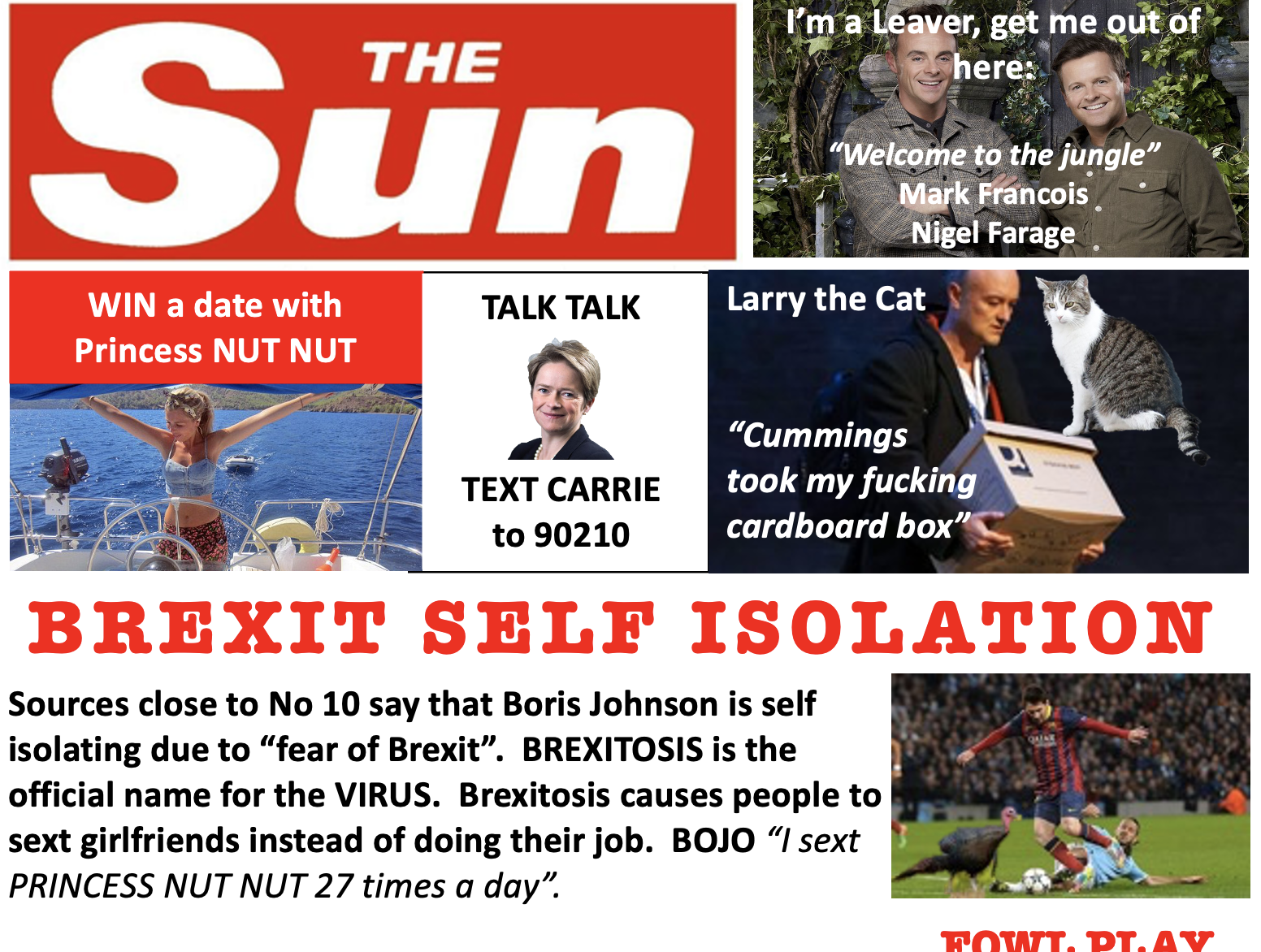 In today’s spoof edition of the Sun, it’s hard to tell satire from reality as Johnson retreats from criticism of his handling of Carrie, Cummings, Corona and the ongoing Britastrophe from the toxic cocktail of Brexit + Corona. This Brexit Self Isolation is not really good enough, especially as it seems he broke lockdown rules to meet one of his MPs.

In case you are not sure which is the fake news and which is real, here is a guide:

Belgium did win the football match 2 – Nil. The playing field was level, unlike our approach to Brexit negotiations, where we want want to kick the ball into the goal whilst the other side are off the pitch.

Johnson did meet with an MP last week, breaking lockdown and causing his Brexit Self Isolation. There was no reason why he could not have done this remotely. It seems very convenient, as it means he gets to avoid questions about Cummings going, Christmas, COVID and the tragic state of Brexit negotiations which climax this Friday. Remember a Brexit deal is WORSE than no deal in terms of the long term future for our children. See Brexit Choices.

Carrie Symonds texts Johnson 20 times a day whilst he is trying to run the country. We now have reached the Eva Braun / Linda Mc Cartney / Yoko Ono / Princess Nut Nut moment of English democracy, where the will of the people has been replaced by the whim of the blonde bimbo Boris.

There is no medical virus called Brexitosis. However, it becomes clear that Brexit has now occupied the minds of a few swivel eyed loons in the ERG, whilst the vast majority of the British public are bored rigid by Brexit and want Brexit flushed down the pan.

Nigel Farage has not shit in his own backyard, yet, although Nige has dumped Brexit on the people who voted for him, as a steaming turd.

Johnson did say F..ck Business. This is the new Tory party. Can you really approve of someone who does this?

Mark Francois is still missing in action. What can be wrong? Write to Mark and wish him a speedy recovery.

We do believe that Larry the cat’s box was stolen by Cummings. Sources close to No 10 suggest that Larry was the only “person” who was not taken in by Cummings’ lies. Tweet Larry on the matter: