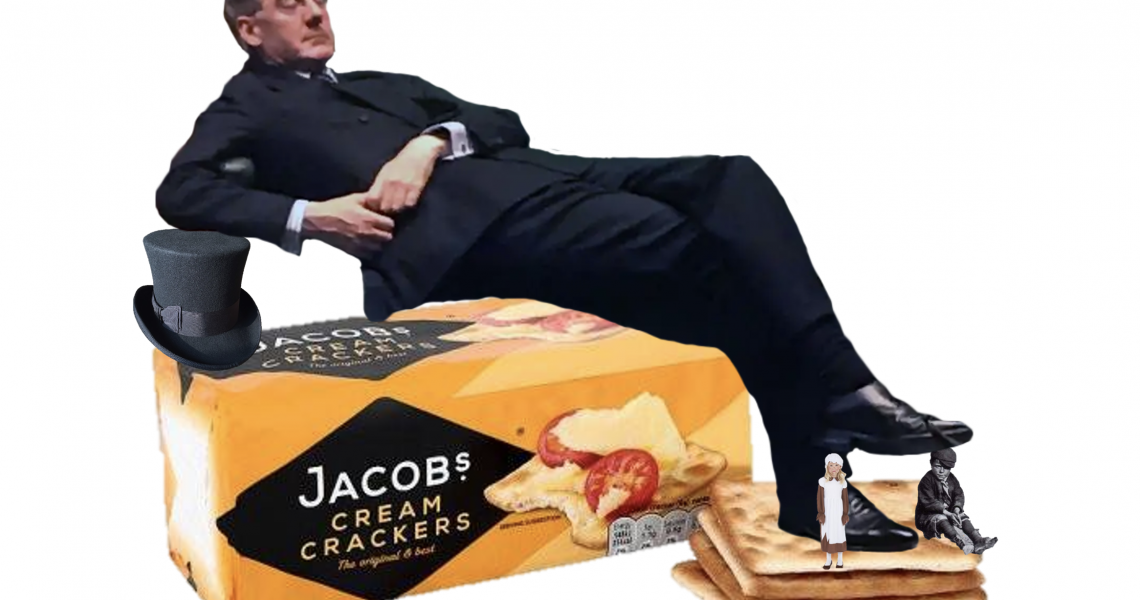 In this roundup of Jacob’s Crackers, we chart the unprecedented developments in our Government’s idiotic approach to Brexit, COVID and Trump. I am finding it very difficult to distinguish satire from reality, as Boris Johnson lurches from the COVID car crash to our Britastrophe in waiting …

Write to your MP

Ask that Brexit be suspended in the wake of Corona

The House of Lords firmly rejected the idea of breaking international law in order to “Get Brexit Done”. Johnson’s response? “Carry On Breaking The Law”. The likely outcome? Britain will be twinned with North Korea as a rogue state. The EU and US will treat Britain accordingly.

Once again, we lead Europe with COVID deaths, due to our “too little, too late’ approach”. This Twitter thread sums up the problems:

If the COVID deaths were not bad enough, it seems that Downing Street is more concerned with petty power squabbles between Dominic Cummings, his cronies and Boris’ girlfriends. Whitehall is now occupied by a large number of Vote Leave cronies and we await the departure of Dominic Cummings and our idiot negotiator David Frost, following Lee Kane’s departure last night. Watch Channel 4 News last night to find out more:

If all of the above were not enough to make you think that we have lost control of our senses, swivel eyed loons John Redwood and, not IBS, but IDS (Iain Duncan Smith) have pointed out that Britain is bigger than the US. They have also told Joe Biden had better watch his step if he wants to get a trade deal with Britain. Texas and California are bigger than the US geographically, never mind the economy. The US economy is 20 x larger than the UK economy. For the avoidance of doubt:

Boris Johnson and Priti Patel scraped the bottom of the barrel by claiming that ending our freedom of movement was somehow a great triumph, whilst trying to pretend that the matter does not apply to British people. Johnson seems to have forgotten that he said exactly the opposite when he was seeking people’s votes for Brexit. In the words of Johnny Rotten:

Ever get the feeling you’ve been cheated?

Oh Brexit, up yours

In case you had forgotten, there’s a thing called Brexit looming. It turns out that 90% of UK trade is not covered by free trade deals after Brexit. So, when Johnson says Get Ready For Brexit, he means himself.

Oh yes, and the hauliers’ guidebook to handle border confusion has been delayed until after Brexit has happened. Presumably this is to give Dominic Cummings more time to appoint more cronies or indulge in a mud wrestling match with Carrie Symonds. Best get more of those portaloos in Kent, Sussex and Surrey …

English exceptionalism continues to dominate our Brexit negotiations, in stark contrast to the EU’s organised and transparent processes to democracy:

If Jacob’s crackers, all the while, Johnson continues to self isolate from the truth about COVID and Brexit, Trump is also bunkering down, whilst he makes a new series of “Borat” with Rudy Giuliani:

Read our satirical front pages of The Sun, Maul, Excess

Join us on ZOOM, Facebook to multiply your impact

One thought on “Jacob’s Crackers”

"Dying for Boris" is released today

@MrsNigel @BrexitRage Johnson looks like the convict he is in that pic.

Should we let the matter of the mystery Tory rapist drop?

Anger in Sunderland as its funding is reduced outside EU.

English roses hit by brexit and covid
@DAustinRoses
brexitears have managed to trash everything most British. Great fucking patriots aren't you? #BrexitReality https://www.gardenforum.co.uk/news/company/david-austin-explains-shortage-of-roses/

How many months do you give it before Brexit implodes?

Brexit-backing Sunderland says it is not receiving same level of funding outside EU https://www.thelondoneconomic.com/politics/brexit-backing-sunderland-says-it-is-not-receiving-same-level-of-funding-outside-eu-222122/#.YDabgia7_5o.twitter

Being Prime Minister is just too head-hurty for Boris Johnson. He’s wondering if Chris Grayling would consider putting a mop on his head and swapping places.

Don’t tell Nigel but the Chiropodist in Brexit-on-Sea procured the ‘pork scratchings’ for me. He’ll never know.