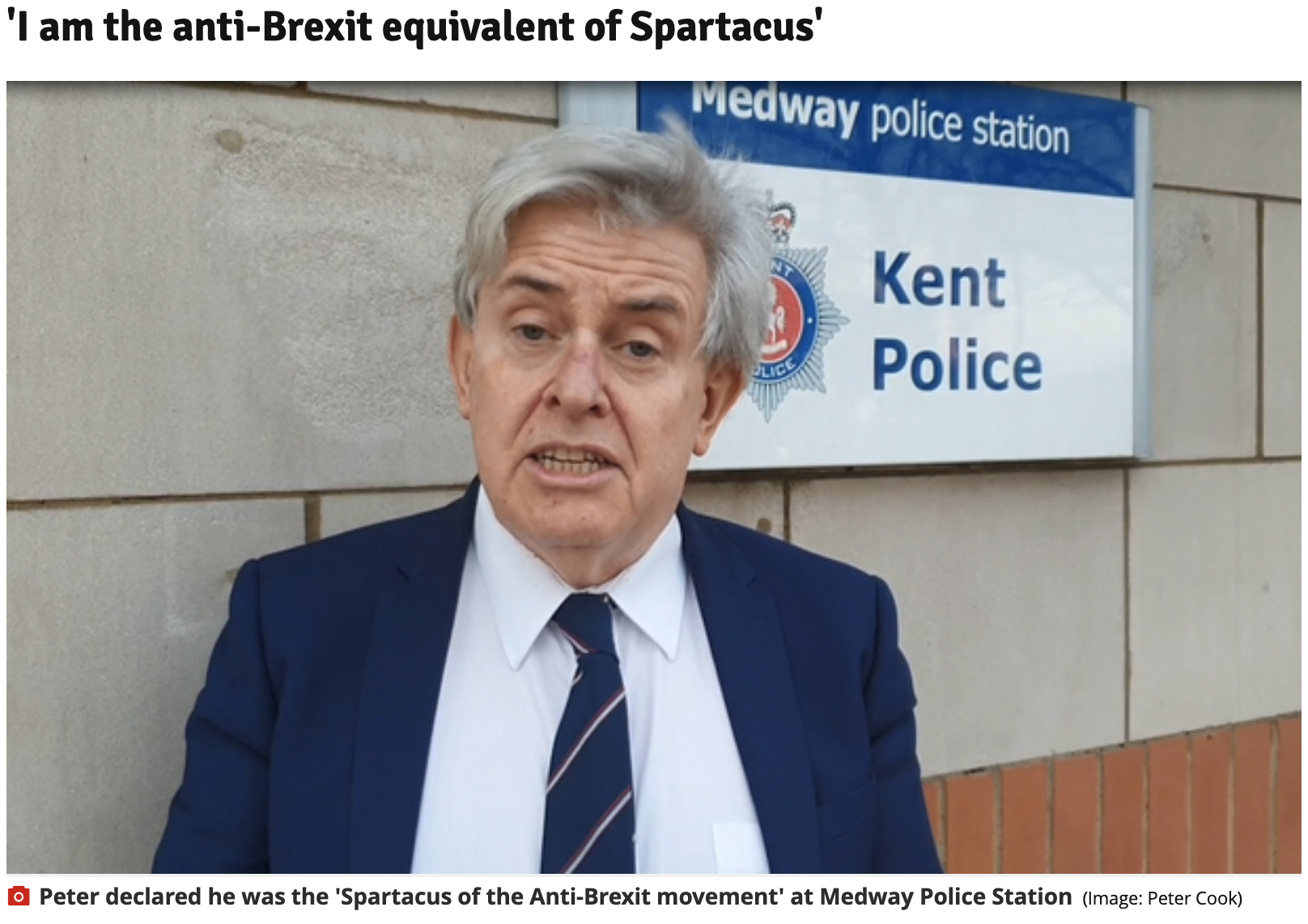 Yesterday, I walked out of Medway Police station as an innocent man. But there was no jailbreak or incarceration in “Kentonville Prison”. I merely handed myself into the Police to assist them with their investigations. This followed a complaint in The Daily Express from someone in Yorkshire about the re-branding of Kent from The Garden of England to The Toilet of England.

The Kent Toilet of England story was reported the world over, from The Guardian, The New European, Evening Standard, FT to Scotland, Ireland, Wales and as far as The New York Times and in Abu Dhabi. Reports said that the police were investigating. It turned out that the Police press officer had made the story up as an “official response”.

I had a cordial conversation with the officer in charge at Medway Police station and then left without the need for waterboarding, electric shock treatment or a cake with a nail file inside.

One man from Yorkshire commented: “The petulant, infantile antics of swivel-eyed Remainers never ceases to amaze.”

ITV News picked up on the story behind the jailbreak headline, as did Kent Live. The Kent Toilet of England exercise was organised to highlight the combined impact of COVID crisis + Brexit disaster = A Britastrophe. In the event the ITV news interview was truncated down to the parochial issue of the lorry parks and Brexit readiness in Kent.

Here below are the original interview questions and our full answers. There have been recent instructions for local authorities to say nothing bad about Brexit, so the Councillor’s hands were tied. Careful analysis of his statement does reveal that the Councillor more or less told viewers to stockpile food and fuel as he cast doubt on whether supplies would get through. I guess that ITV want to only spread good news in the season of goodwill, but I had hoped for better from them. It seems that everyone is scared of this Government, but why?

Q1 Kent County Council say that everything will be fine after Brexit. What do you say?

A This is disingenuous at best and a downright lie at worst. I understand that people want to feel optimistic at this time of COVID crisis and Christmas. However, in my long experience, optimists are usually people who have not had enough experience. The French prefer experience over fantasies. They showed that a 70 second transit time produces a 5 mile queue. This has been confirmed by the Government’s own reports on the matter. I myself have spoken with Kent Councillors, who confirm that once contagion takes place with cars, we are likely to see gridlock in towns and village, as members of the public attempt to use rat runs etc. It has recently been reported that Government plan to use the military to fly COVID vaccines into Britain – obviously the roads are OK then?

Q2 You organised a stunt to change the signage at the Kent border to say Kent, Toilet of England. What was behind that?

A We did it to highlight three main points:

Brexit can be stopped or suspended.  Although legally we have left the EU, stopping or suspending Brexit is merely a matter of political will.

Nobody voted for the toxic combination of Corona crisis plus Brexit disaster, which I call a “Britastrophe”.  We must Re-Boot Britain and that’s why we feel the need to re-start the conversation with all the people who voted in the referendum.

We have interviewed former MEPs across the political spectrum.  They confirm that no deal is more or less the same as a Brexit deal. Theresa May was right when she said “NO deal is better than a bad deal”. She might have added that NO Brexit is better than a Britastrophe.

Q3 What should Kent County Council do now?

A They must ask Boris Johnson to suspend or stop Brexit in the wake of Corona. Border delays are the tip of a much bigger iceberg socially, economically and politically. The GDP shock to our country will be between 5-10 times larger than the 2008 crash. People have no idea just how bad this will be. We have to endure Corona as a natural phenomenon. We don’t have to endure Brexit on top of Corona. Tonight we’re gonna have a Jailbreak …

Please take action by writing to MPs and EU leaders. Ask for Brexit to be stopped or suspended for two years minimum.

Here is the “I am Spartacus” video we made with the help of people across the globe who admitted to the sticker crime. I am hoping all of them manage to make a jailbreak …