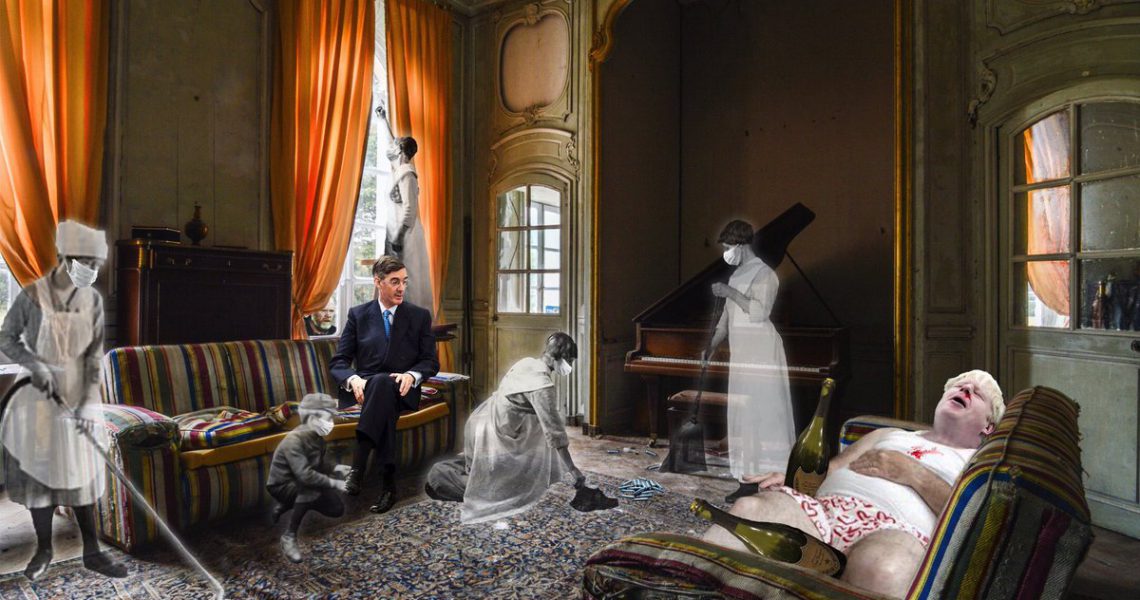 Jacob Rees-Mogg has been slammed for suggesting the people died in the Grenfell Tower tragedy because they listened to the fire brigade’s orders. Mugged by Mogg, Jacob claimed that they lacked ‘common sense’. The Tory MP told LBC host Nick Ferrari that the victims would have survived if they’d just ignored what they were told. Since when would anyone ignored the advice of someone in charge of saving lives if your house was burning down. The Metro reported that Jacob would have left the building as ‘it just seems the common sense thing to do’.

Faced with furious complaints that lorry loads of fish had to be thrown into the sea owing to delays caused by Brexit red tape, Jacob Rees-Mogg replied as follows to questions in the house:

“The key is we’ve got our fish back. They are now British fish and they’re better & happier fish for it”

Others pointed out that rotting fish are not happy fish. Also, the happiest of all are those who are not caught and live out their lives peacefully because British fisherman have all gone bankrupt because they have no one to sell their fish to!

This piece of condescending Etonian humour stands comparison with Mary Antoinette’s remarks about cake eating. It is fit for an audience of three-year-olds only, not grown ups inside or outside the House of Commons.

Jacob Rees-Mogg is also under fire for accusing UNICEF of a “political stunt” after the UN agency stepped in to help feed deprived children in the UK during the COVID-19 pandemic.

The Commons leader hit out at Unicef, which provides humanitarian aid to children worldwide, after it launched its first domestic emergency response in the UK in its over 70-year history. He characterised Unicef’s support as “playing politics” and said it should be “ashamed of itself”.

As part of the support programme of more than £700,000 to help fund projects for children and their families, UNICEF has pledged £25,000 to supply nearly 25,000 breakfasts in a south London borough over the Christmas holidays and February half-term.

After UNICEF’s support in the UK was raised in the Commons, Mogg stated:

“I think it’s a real scandal that UNICEF should be playing politics in this way when it is meant to be looking after people in the poorest, the most deprived countries in the world, where people are starving, where there are famines and there are civil wars. And they make cheap political points of this kind, giving, I think, £25,000 to one council. It is a political stunt of the lowest order.”

He defended the government’s response to child poverty, including expanding free school meals, adding: “UNICEF should be ashamed of itself.”

However, the minister’s comments prompted a backlash, with Labour’s deputy leader, Angela Rayner:

She said: “In one of the richest countries in the world, our children should not be forced to rely on a charity that usually works in war zones and in response to humanitarian disasters. The only scandal here is this rotten Tory government leaving 4.2 million children living in poverty, a number that will only rise due to the coronavirus crisis.”

Write to your MP using this as content to complain about the slow creep into fascism as espoused by Jacob Rees-Mogg. Refuse to be mugged by Mogg.

Here’s a couple of songs we wrote which express our views on being mugged by Mogg:

Buy the Rage Against The Brexit Machine songs at Bandcamp to support our continuing work.

Anna Kettley, UNICEF UK’s director of programmes and advocacy, said: “UNICEF UK is responding to this unprecedented crisis and building on our 25 years’ experience of working on children’s rights in the UK with a one-off domestic response, launched in August, to provide support to vulnerable children and families around the country during this crisis period.

“In partnership with Sustain, the food and farming alliance, over £700k of UNICEF UK funds is being granted to community groups around the country to support their vital work helping children and families at risk of food insecurity during the coronavirus pandemic. UNICEF will continue to spend our international funding helping the world’s poorest children. We believe that every child is important and deserves to survive and thrive no matter where they are born.”

UNICEF UK said the first round of grants were confirmed in mid-August and all funded programme activity was due to conclude in February next year.

It has given a £25,000 grant to the community project School Food Matters. The charity says it is working with Premier Foods, Southwark council and Southwark Food Action Alliance – a collective of charitable organisations, residents and community partners – to deliver 18,000 breakfasts to 25 schools for distribution around the borough over the two-week Christmas holidays, as well as an additional 6,750 breakfasts over the February half-term.

The PM’s spokesman declined to comment directly on Rees-Mogg’s remarks, saying: “What we would point towards is the work and the action that we’ve already taken to support the most vulnerable and the poorest families across the country.”

@MrsNigel @BrexitRage Johnson looks like the convict he is in that pic.

Should we let the matter of the mystery Tory rapist drop?

Anger in Sunderland as its funding is reduced outside EU.

English roses hit by brexit and covid
@DAustinRoses
brexitears have managed to trash everything most British. Great fucking patriots aren't you? #BrexitReality https://www.gardenforum.co.uk/news/company/david-austin-explains-shortage-of-roses/

How many months do you give it before Brexit implodes?

Brexit-backing Sunderland says it is not receiving same level of funding outside EU https://www.thelondoneconomic.com/politics/brexit-backing-sunderland-says-it-is-not-receiving-same-level-of-funding-outside-eu-222122/#.YDabgia7_5o.twitter

Being Prime Minister is just too head-hurty for Boris Johnson. He’s wondering if Chris Grayling would consider putting a mop on his head and swapping places.

Don’t tell Nigel but the Chiropodist in Brexit-on-Sea procured the ‘pork scratchings’ for me. He’ll never know.

With the hairdressers shut and a hot date (with person or persons unknown) on the cards, Ann has given herself a Lockdown haircut. I would agree she no longer looks middle-aged. More like Middle Ages.