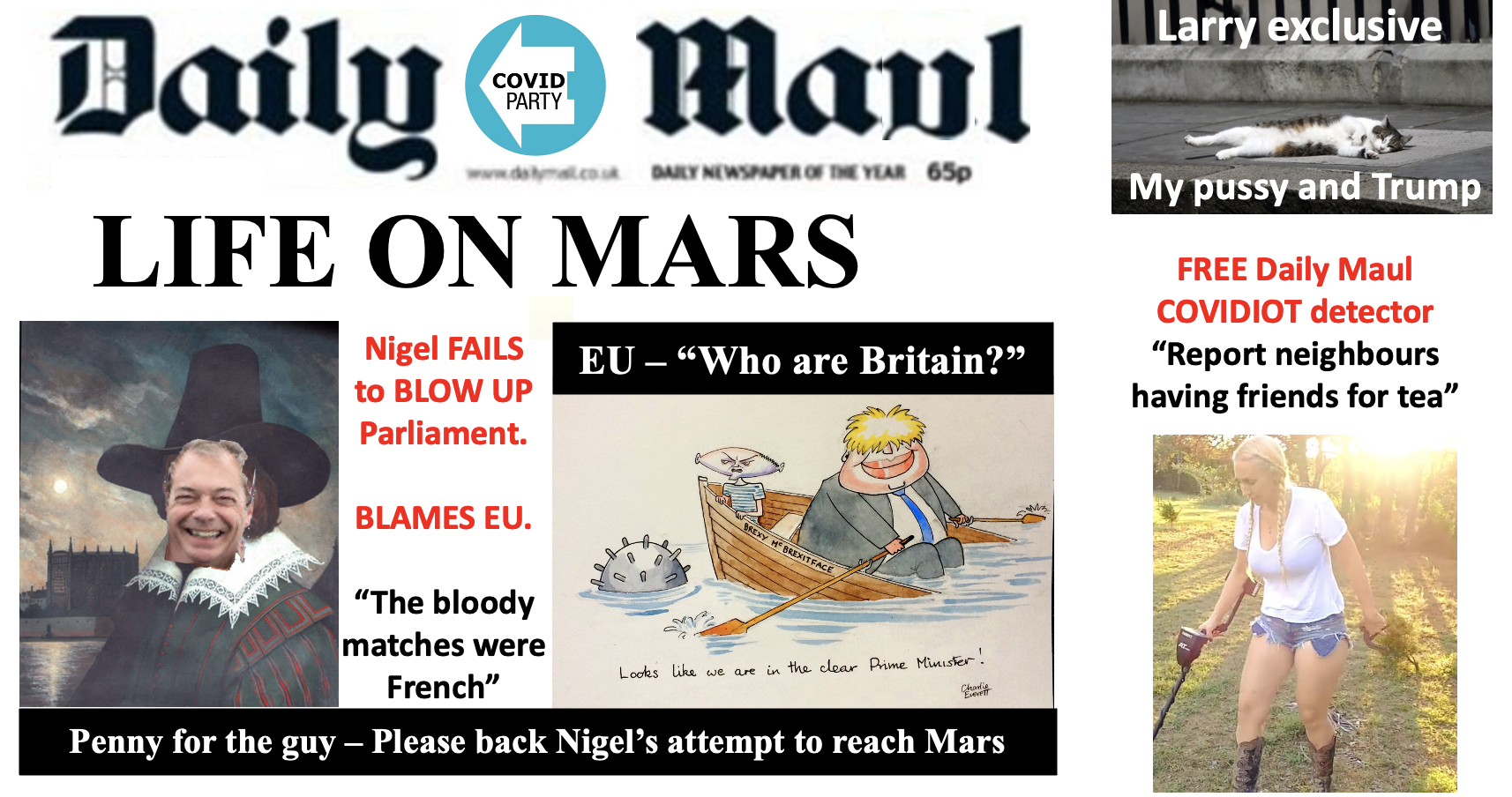 Penny for the Guy

In these crazy times it becomes difficult to tell satire from real life, so here’s a little help to separate facts from fiction:

FACT : Priti Patel has banned protests of more than two people so that Johnson can “Get Brexit Done”, without having to have any visible resistance on the streets. We can still organise resistance. See 11 ways to SuspEND Brexit in a COVID safe way.

FICTION : Donald Trump has not been accepted by Martians. Applications outside the Solar System have also been rejected by Star Trek command.

FACT : The Daily Express has blamed Remainers for the Joe Biden victory. I never knew we had so much power.

FICTION : David Bowie does not live on Mars.

FACT : The Trump meltdown means that Boris Johnson has no “BATNA” in negotiation terms (BATNA = Best Alternative To a Negotiated Agreement). Just to follow the car showroom analogy, the EU showroom and US showrooms are not of equivalent value anyway, since 50% of our trade comes from our relationship with the EU. Walking out of the EU showroom to the Trump one is rather like leaving the Mercedes showroom for the Trabant one, in terms of cars.

FICTION : Nigel Farage has not infected anyone with COVID. He has however infected 17.4 million people with a pack of lies. Many people have now awakened to this fact and no longer want Brexit.

FACT : Boris Johnson has had to do a U Turn on COVID, due to Dither and Delay for 6 weeks. He was told by scientists to introduce a lockdown on 22 September. Instead he waited 6 weeks to do so until bonfire night. In doing so he has already placed tens of thousands of people on the Corona bonfire. This will likely mean that the lockdown will be extended. Basically:

A stitch in time saves nine

FICTION : There is no such thing as a COVIDIOT detector. However there are many vital signs : the assumption that every nurse and doctor in the world is in on the “scam” ; the suggestion that dead people are fabrications and so on.

FACT : Mars cannot support intelligent life. It can however support Donald Trump. Donald did claim that Mars was in fact part of the Moon in 2019. More on Brexit and David Bowie at Rebel Rebel.

FICTION : Larry the Cat has not been touched by Donald Trump.

FACT : Nigel Farage has not managed to blow up Parliament. Please give a penny for the guy, as Nigel’s Reform party appears to be failing. In other news, Thanet and Swale MP’s Craig McKinlay and Gordon Henderson have just voted against lockdown. It is perhaps no coincidence that their constituencies have the highest incidence of COVID in Kent. They get our award for COVIDIOTS and are literally going to be responsible for further unnecessary deaths through their careless attitudes towards the people that voted for them. Write to them to express your concerns : Craig McKinlay ; Gordon Henderson.

With thanks to the image of Boris Johnson by Charlie Everett.