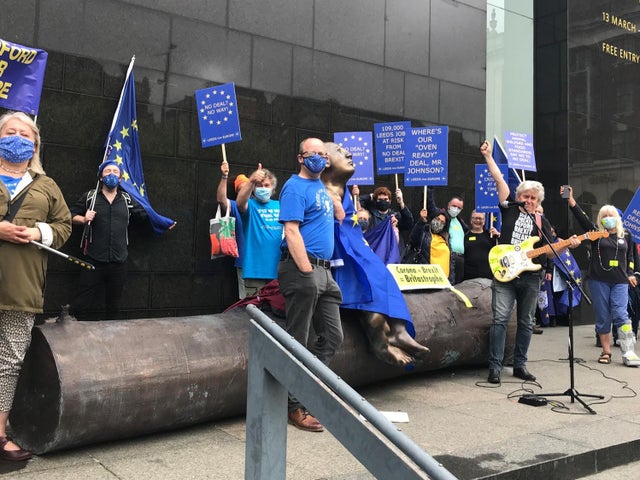 It’s great that some Remainers are still raging against Brexit.   I am one of them, but I know some who are politely sighing and saying “ah well, it’s over, that’s Brexit done, we’ve left the EU, tut tut, what a shame, that’s the next fifty years and our children’s future gone, but hey we tried.”

So it was brilliant to join Leeds for Europe and Bradford for Europe in the Britastrophe Tour protest outside the Art Gallery in the centre of Leeds on Saturday.  There were about fifty socially-distanced people there waving EU flags and banners, such as “109,000 Leeds Jobs at Risk from a No-Deal Brexit”.  I held a placard reading “One Crisis at a Time” which I think is an excellent point – who needs the total uncertainty of Brexit on top of a global pandemic with the Government’s muddly messages that “there may be a second wave coming this winter” neatly contrasted with “it will all be over by Christmas!” Read the report by The Yorkshire Post – Britain’s most trusted newspaper.

We very much enjoyed listening to Peter Cook’s anti-Brexit songs – my favourite lyric was the rewrite of “Another Brick in the Wall” as “Another Prick in the Mall”.  Afterwards we marched up The Headrow passing many people who were giving us a thumbs up and some police asking what it was about – though the banners, I felt, did give something of a hint.

Just one bloke decided to make what I think was supposed to be the noise of a sheep at us – which is interesting, since I consider any “sheep” to be the ones who have been mindlessly chanting “Get Brexit Done” and “Leave Means Leave” without knowing anything about what the results might be.

I live in Skipton and enjoyed meeting the Leeds for Europe people there – it was a well-organised and heartening event, and got a good write-up in the Yorkshire Post.  It was good to know that there are other people who are not prepared to sit back and simply sigh as the destruction of Brexit slips through.

The Britastrophe Tour makes its final stops at Worcester St Andrew’s Spire (10.30) and Eastnor Castle (12.00) today. To those that have asked if we can visit them to give talks or musical performances with the Bollocks to Brexit Mini, the answer is yes, but the project needs support via “Let’s Re-Boot Britain“.

Oh yes, and where’s the Russia report? We accessed a secret copy below. Read the details …