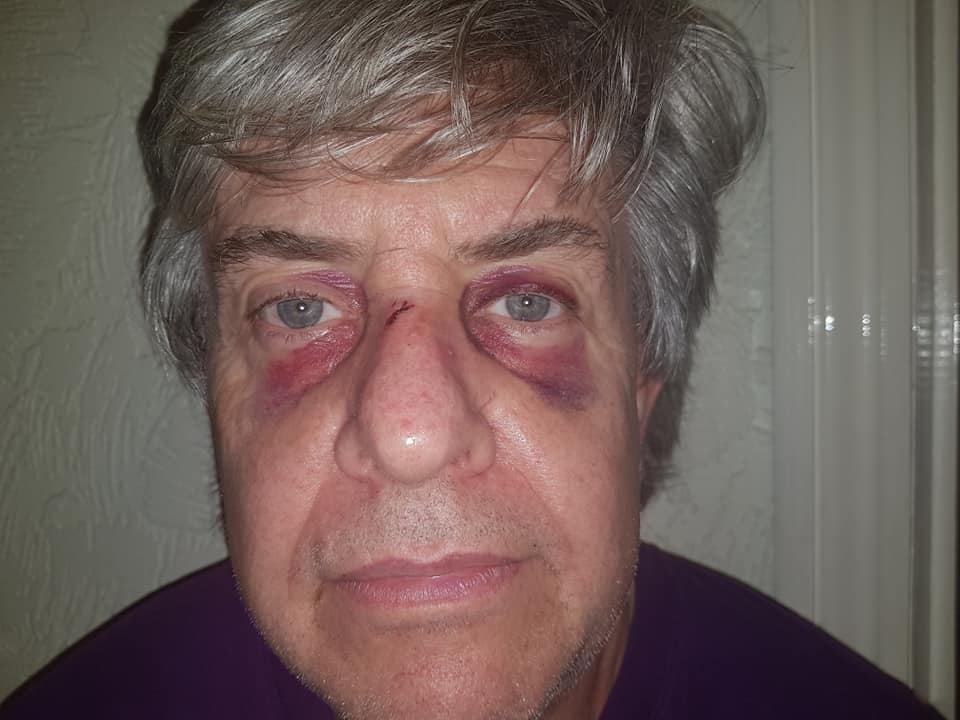 Sunday 30 August : Today I must waste more time arranging protection for my wife and family, having spent several hours yesterday reporting a threat of violence to the police from a person pretending to be a neighbour (apologies in advance for the bad language).

The person behind this has been collecting stickers from all over my town. It must have taken them ages … and has been placing them in my garden to remind me that “I am being watched”

On Saturday they got braver and posted the letter through my door. A horse’s head has yet to arrive … Obviously they don’t realise that there are many people placing stickers and protesting in smaller and larger ways across the country. As the most prolific and visible protester in the area they have singled me out for “special attention” when there are notionally at least 16.4 million of us, and currently at least 57% of the population do not want a damaging Brexit for their children’s futures.

The Police have recorded an incident of malicious communications which may escalate to something more serious. They are presently scanning the letter for fingerprints and monitoring CCTV cameras for the suspect etc.

What’s odd about this is that the Brexiteers “won”. In my many cafe conversations I have never met a more unhappy bunch of “winners” however. if democracy were a one time project, women would not have a vote, bear bating and hanging would be legal. Democracy is a process and we have a legitimate right to express concern, fear and anger about what is to come if we continue with Corona + Brexit as a Britastrophe.

Wednesday 02 September : I have now surveyed various items to allow me to continue with my activism. A CCTV system for the house, a new back gate with a more secure lock, a personal dash cam for my bicycle and a personal alarm for my wife to share. If you wish to support the costs of continuing, please find our crowdfunder at Let’s Re-Boot Britain.

Paradoxically, we were told on the street by some reasonable Brexiteers on Saturday that the main benefit of Brexit was “freedom”, yet somehow I don’t feel free with all this tech to terrorise my life. Like most Brexiteers, I simply want to live what remains of my life in peace and in the knowledge that my children’s futures are well managed by the Government of the day. The version of “democracy” portrayed by this person is not one that I recognise, apart from in places like North Korea, Belarus and Russia.

I have already faced violence several times over the last four years as one of the more visible anti-Brexit activists in the area. The most notable incident was when I arranged to meet the head of the European Movement in a train home but he then said he could not be bothered to meet me as his leg hurt and he did not want to move carriages. I decided to go one extra stop to meet him in Rainham but then missed him at the exit gate. On my return home I was attacked by angry Brexiteers because they did not like my t-shirt and given two black eyes.

Like Gina Miller, I wish to meet the person who is doing this for a dialogue. I find that, once we can recover someone’s “story”, all somehow notice just how we are not really that different. Bizarre ideas that all Remainers are lefties, all Brexiteers are racists and so on can be put to one side and we concentrate on what connects us and where important differences lie. Just last week I spoke at length with one angry man who was on the edge of violence to begin with at a street protest. Once we got past “the dialogue of the deaf” we both agreed that there was much to be fixed in Britain. We also agreed that it was not the EU that had “dun it” in the vast majority of cases. And that all political systems had their faults. We even discussed some areas where EU reform was needed. In one hour of patient listening and dialogue, we gained a common understanding and agreement on many things.

If you are reading this, pop your phone number through the letter box without the F and C word and we’ll fix a time for an online conversation. This will save the Police valuable time as I will be able to call them off. I may even consider a cafe meeting, depending on how our initial conversation goes.

The gentle art of Brexorcism

To learn how to conduct what I call “Brexorcisms”, read our book “Let’s Talk About BREX .. it“. It takes skill, patience and time.

Aside from this, our street events continue with great success. Join us today at Parliament Square, then Sheerness this Saturday 6 September and Rochester on Saturday 13 September.

Say NO to any form of BREXIT