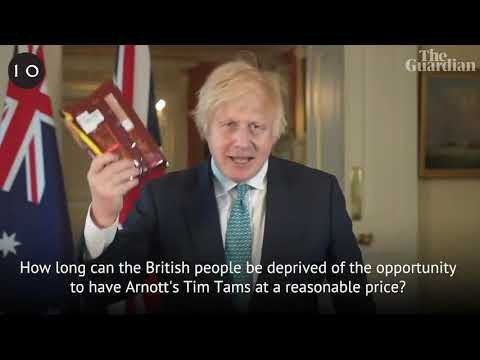 THERE IS NO SUCH THING AS AN AUSTRALIAN BREXIT

THERE IS NO SUCH THING AS AN AUSTRALIAN BREXIT

THERE IS NO SUCH THING AS A VEGEMITE BREXIT

THERE IS NO SUCH THING AS A TIM TAM BREXIT

The notion of an Australian Brexit was introduced into the lexicon of Brexit Bullshit Bingo early in 2020 as a euphemism for No Deal Brexit. The EU does not have a deal with Australia. We are headed for a WTO No Deal Brexit, which should please the remaining 37 % of the population who want their Brexit hard, with BBQ sauce and massive tariffs on imports and exports.

Do not be gaslit by this. There remains NO good Brexit deal. The only good Brexit is a dead Brexit. Read why No Deal and a Brexit deal are the equivalent of a sudden death or a slow death in Brexit Choices. Read why rejoining is a unicorn in the mid-long term. We must now suspend or end Brexit in the wake of COVID and an oncoming “Britastrophe“.

Read Operation Pisspot – why Kent is now a toilet

Thank you to Patrick Tribe, Doug Futers and Helga Perry for the Aussie provocations !!

One thought on “An Australian Brexit”

Only six Tory MPs rebelled to vote in favour of extending the £20 uplift to Universal Credit.

The others abstained even though 100,000s children may be plunged into poverty. Remember this

Hapless @BrandonLewis wittering on @GMB still refusing to take any govt responsibility for the horrendous death toll from COVID. These people are truly repulsive.

@Londonkiltmake1 @nickreeves9876 I agree the Ref was tainted and advisory. But the result could have been ignored or kicked into the long grass. It was May's and then Parliament's decision, by a huge majority, to invoke Art 50. 498 MPs (Lab & Cons) are guilty of Brexit and I, for one, will never forgive them.

The attempt to install an unqualified Trump loyalist as NSA General Counsel just 72 hours prior to the start of a new Administration is highly irregular and highly suspect. This placement should not move forward.

Brexit: The only time that winners complain that the losers are gloating.

Apparently @BorisJohnson has pledged to compensate all companies who experience problems exporting goods to Europe through no fault of their own. This is completely unsustainable and yet another example of him wasting vast amounts of public money just to cover up his Brexit lies.

Brandon Lewis lying through his teeth on @BBCr4today @BrandonLewis

Frances Williams - one of the 3.5% #FBPE@FranJWilliams·
2h

Frances Williams - one of the 3.5% #FBPE@FranJWilliams

Napier Barracks in Folkestone. Asylum seekers locked away under appalling conditions after their protest last week. Our government is grotesque and Priti Patel is inhuman.
#ToryBritain #HostileEnvironment

#BrexitCarnage is not what they promised. Leaving the SM was not what they promised.
Gov did publish figures showing job loss of 1.75m with a “comprehensive FTA” yet it’s had barely a mention.
Those in business still supporting brexit but now blaming the Gov? It was YOUR jobs https://twitter.com/viewsfromleft/status/1335519191990931456

Views from ‘the Left’ #FBPE 🏴󠁧󠁢󠁥󠁮󠁧󠁿🇳🇬🇬🇧@viewsfromleft