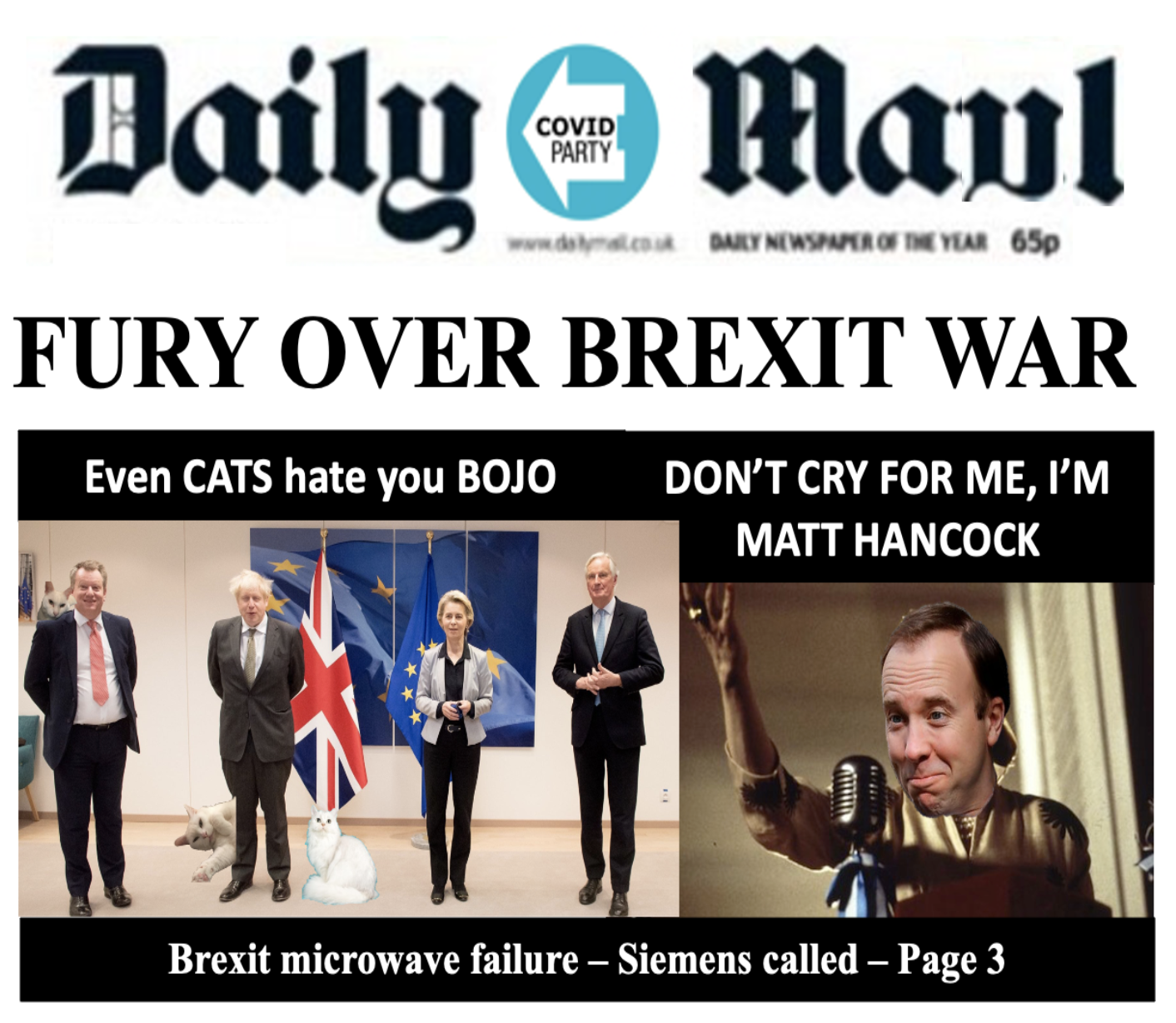 In this edition of the Daily Maul, we cover BOJONA-21 – the New Variant Brexit. It seems that the Brexit deal we did has mutated, so now we must waste more time and money trying to get a new deal after we already left. Fat chance. Read the terms and conditions.

The Maul also covers the Australian deal, an exposé into the private life of Boris Johnson and a new hardcore approach to immigrants by Priti Patel. As always, a fact and fiction checker has been prepared as it is hard to tell the difference between farce and fact with our Government.

FACT : Australian beef is hormone injected. It can be selectively fed to children and vulnerable people as UK Government rules allow for cheap food to be dumped on schools, the NHS and care homes. Our EU membership protected us from dodgy food standards but we opted for a blue passport. Liz Truss faces a dilemma on whether she kills British farmers or British children.

FICTION : Poots is not undergoing conversion therapy but he does need to re-take CSE History and Science.

FACT : Priti Patel has had some ‘tough girl’ photographs taken so she can look tough on immigrants. At the same time Liz Truss will be agreeing to give Indians freedom of movement as part of her Brexit “fire sale”. This is all grandstandin on Patel’s part to make her look like she is respectin the will o’ the people. It’s just a photo scam.

FACT : In other news The Department of Health wanted to send 1.6 million pieces of PPE to India but the Treasury stopped them because of Rishi Sunak and Priti Patel’s overseas aid cuts. Noice

Please support our campaign to rejoin in the Amersham and Chesham by-election.

Get in touch to find out how you can help on the ground or on social media.

FACT : The new DUP leader Edwin Poots is a creationist who claims that the earth is only 6000 years old. Just when you thought that it could not get any madder than Arlene Foster …

FICTION : Boris Johnson is not full of custard. He is however full of shit.

FACT : “Sir” David Frost continues to pretend that Brexit is the fault of the EU. Frost is a serial failure as a civil servant who got lucky by suggesting that he would be a useful liar for the Government. In an astonishing move, Frost said that noboby expected Brexit to cause problems in Northern Ireland. Marina Purkiss sums it up well. Sounds a bit like the Monty Python Spanish Inquisition sketch …