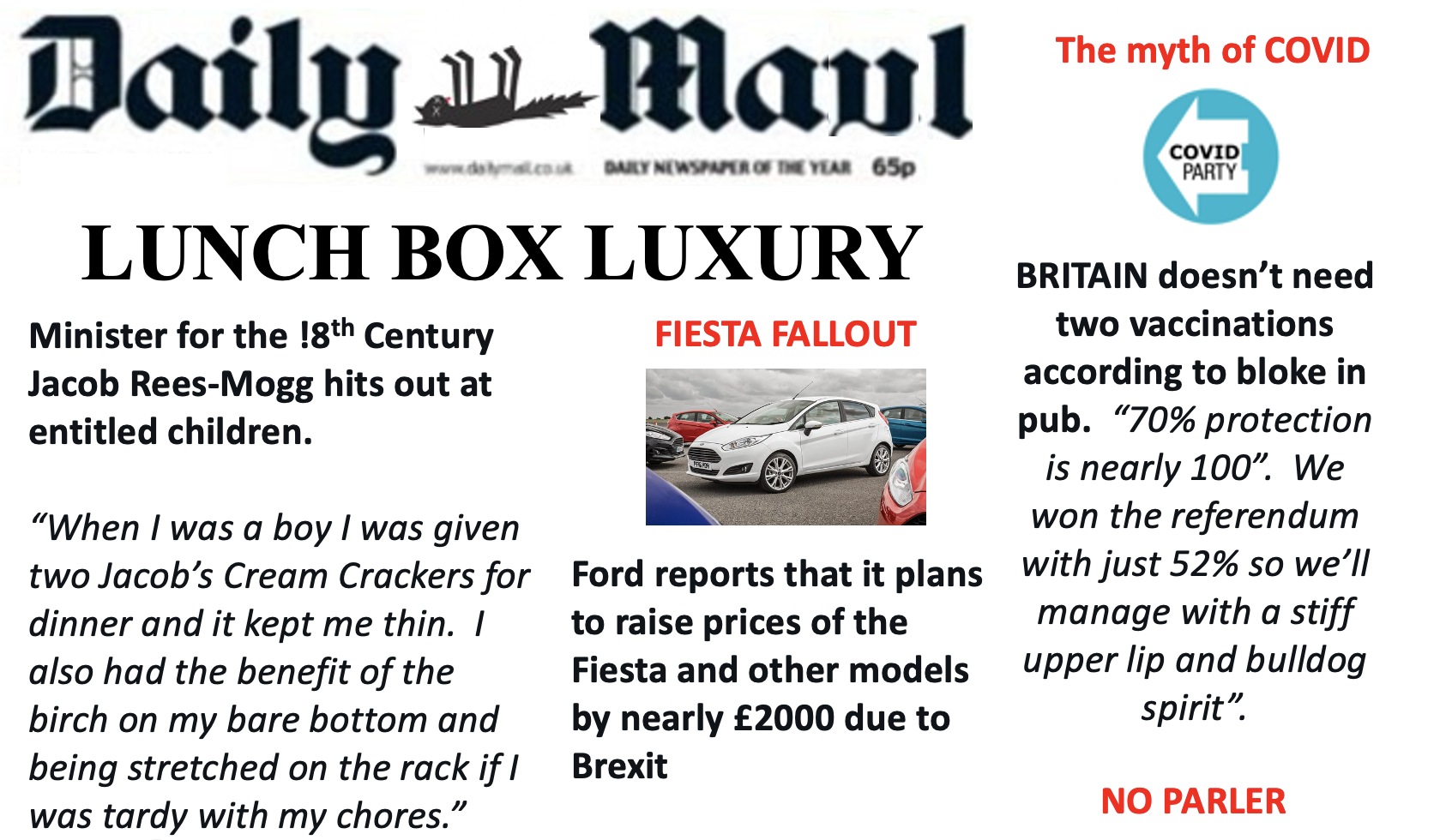 In our latest series of Populist Press Parodies from the Red Tops, we tackle the big issues of the day. In case of confusion in our age of disinformation, please find our fact and fantasy checker at the bottom of the page.

FANTASY Jacob Rees-Mogg did not live in fact live on a diet of Cream Crackers. He did however proclaim that British fish were happier now that they have Brexit. It’s just a matter of time before he asks for the restoration of the birch.

FACT Ford has decided to raise the price of a number of models due to increased costs of manufacture due to Brexit.

FACT The Government plan to only give one shot of the COVID vaccine. This would provide 70% protection. There is no evidence to suggest that this will lead to herd immunity. It is also feasible that it would mean that insufficient protection is given, providing the Corona virus with an open doorway to the development of a more virulent strain. We will essentially be the clinical trial for this risky experiment.

Write to your MP on the risks of this strategy

Shame these MP’s on social media. Request a public apology for their sins

FANTASY There are no Brexit Universities.

FACT British people living in Spain were surprised to learn that they could not stay in their second homes indefinitely and that they needed to make a financial contribution to their country of residence. They failed to understand that freedom of movement works both ways under Brexit.

FACT A bag of sovereignty is being auctioned on e-bay. Sadly, no one has thought it to offer any value.

FACT Just days after we signed the Brexit trade deal we are breaking it. In particular we plan to use neonecotonoids on sugar beet. This chemical is toxic to bees. It is estimated that once the bees die, we are not long for the world either.

Sign the petition and write to your MP on this matter

FACT The European Union are offering to help Ireland from their fund post Brexit. In the longer term it is probably that Ireland and Northern Ireland will simply cut England out of the equation through their dealings.

FICTION French model Rachelle Gauchette is not travelling to Scotland or Ireland to boost morale for independence or reunification … yet. Napoleon did not have a Napoleon complex. The offer of a night with Nigel Farage is a dirty lie.

Find all our Red Tops at Gutterpress