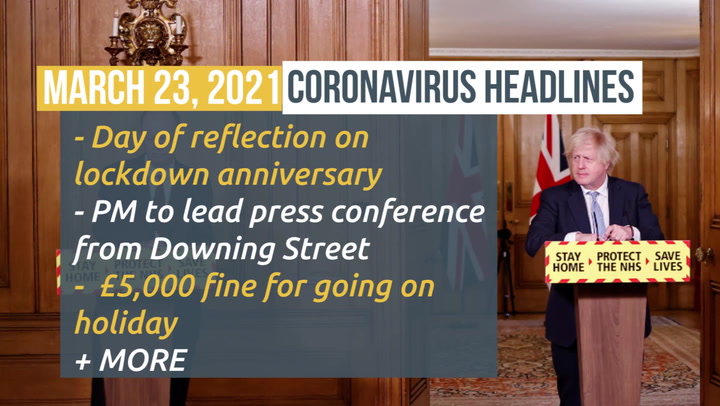 One year ago, COVID was put in the microwave oven by Boris Johnson. Let’s undertake some reflections on a year of unprecedented and unnecessary death, dither and delay.

Boris Johnson reports that the third wave of COVID will “arrive on our shores” like unwanted migrants, in an attempt to sidestep responsibility for Stanley Johnson, who continues to exercise freedom of movement to service his Greek villa. Whilst the rest of us face a £5000 fine for going on holiday. Our Government now resembles the cast of “Dallas” in terms of policy making based on the needs of the Johnson family circle.

We are also reminded that Johnson was more interested in hiding in fridges and minting Brexit 50 pence coins than listening to experts. When other world leaders were listening to scientists, Johnson was listening to Winston Churchill speeches at Chequers. The impact in Britain has been “world beating” deaths approaching 130 000 and probably nearly as many unnecessary additional deaths. We continue to have no plan for the future, except distraction via flag shagging, purchase of tanks and nukes and the ceremonial decoration of No 10 Downing Street for propaganda purposes.

Denial is not a river in Egypt

Mike Cashman has articulated the stages of Brexit awareness. Many are still at “stage zero”, believing that Brexit is either a boost to Britain or of no consequence, as the impacts have been masked by COVID:

The provision of inconvenient facts demonstrate that Brexit is a much bigger long term destructive force for Britain. Much bigger and deeper than COVID, but more “slow motion”.

Check out Edwin Hayward’s running log of Brexit impacts via Google. What will happen on April Brexit Fools’ Day?

At a basic level, read this story of someone who bought a racing bike from Poland, having been told by Gov.uk that there would be no tariffs who now finds himself having to pay £2000 more to receive the bike and £1000 to return it.

In the Falklands, their economy is being wiped out by tariffs applied to seafood and lamb. Reports also indicate that there are signs that this makes the security of the Falklands (and Gibraltar etc.) less certain.

Meanwhile the country is gaslit by talk of riots amidst the peaceful protests by women in Bristol. Mysteriously, the Police withdraw their statement of injuries. This report presents an interesting view on the protest. It is enough of an outrage that the police should be involved in the murder case but beyond belief that they may have been involved in gaslighting activities to distract people from the murder.

Back to the “Good Old Days”

Northern Ireland are beginning to understand the impact of Brexit on the resurgence of what was euphemistically describe as “the troubles”. We warned Johnson and his Government of this but clearly he may as well have said “Fuck Northern Ireland” as well as “Fuck Business”.

Meanwhile the real wars are in the race to have the best presidential style briefing platform, as Johnson spends an eye watering £2.6 million on home improvements for 10 Downing Street. All furniture is to be sourced from Ikea as this tweet shows.

The other popular bloodsport in Brexit politics is to blame others for your own failures. Let’s remember that Britain has not exported a SINGLE VIAL of vaccine to other countries when we start pointing fingers at others. Even the Telegraph accept that Sir David Frost is not up to the job.

The Making of ‘Ride On Time’

"I have talked to senior BBC executives, and they tell me, they personally think it's wrong to expose lies told by a British Prime Minister, because it undermines trust in British politics." — Peter Oborne. 🏴‍☠️

@pmdfoster The thing is that I bet Prince Phillip would hate this wall to wall coverage.

@mikegalsworthy @MargyMayell Mike it was your support for the #FBPE movement that got me involved.

It would be great to see you publicising #FBPA. Follow Back #ProgressiveAlliance.

It makes me sick to even think of what another term of government under this regime will be like. Democracy is running out.

@BremainInSpain @JulieLeyGibbs Why on earth is it the fault of Dublin? The blame is on the Tories in London.

Reading the Loreal story today (they took £1m in furlough money but made billions in profit during pandemic) and wondering whether we need to have a discussion about companies that prospered during pandemic paying that money back.

This is toxic. Pure corruption. For the #Conservative Party, the normal way of doing business. https://twitter.com/Gabriel_Pogrund/status/1380933543723950086