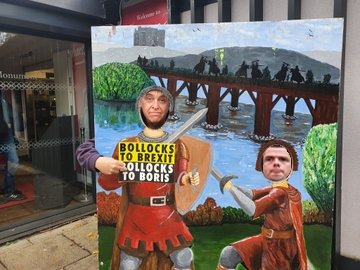 We need help to build our website for Scottish independence and free ourselves from Tory lies about Scotland’s need for self-determination after the catastrophe of Brexit. Find our page on Scotland here. We need a fully developed set of proposals that deal with the economy, social affairs, environment, relationships with what remains of Britain, the politics and so on. Recent myths that have emerged include:

Rubbish. Scotland is self sufficient in sustainable energy alone. Scotland outperforms all the other UK nations in terms of international exports. In  contrast, England’s international trade deficit in goods is massive.

Scotland would lose the pound, have no currency or be financially unstable

Rubbish. Scotland already has its own currency and decisions about currency can be made at the most advantageous time to the Scottish people. Plenty of small countries have their own currencies and exist perfectly well on the high seas of a global financial world. To see financial instability in a strong economy one only has to look to Kwasi Kwarteng’s ‘mini budget’ and the impact on Britain’s fortunes! It is bad leadership and financial management that leads to such problems.

Scotland would lose the Royal Family

Rubbish. The royals own a lot of land in Scotland. It’s possible to share our royal family if you concerned about such things. It’s a non-issue if you are a unionist. You can have your Royal Family and eat it too.

Scotland does not have the economy to prosper

Rubbish : Lots of small countries thrive around the world. Scotland is a net exporter. As a member of the single market, Scotland stands to gain from what I call “The Best of Both”.

Scotland would suffer from a land border with England

Rubbish. To quote a well used Brexiteer phrase “They (England) need us (Scotland) more than we need them”. Check the figures re the balance of trade between Scotland and GB. In brief Scotland exports £17,455 per head per year, while the UK exports £8,626.

Why then are the Tories making a big deal of spinning lies about Scotland?

I think it’s simple to understand. In 2019 You Gov reported that Tory voters said that they were happy to see Scotland and Northern Ireland as ‘collateral damage’ of Brexit. Perhaps they have realised how wrong they were in the wake of Brexit Carnage. Even the Torygraph is now reporting that project fear was right all along.

If you are able to help us build the case for an independent Scotland, please get in touch via rage@brexitrage.com

BUY OUR BOOKS on Rejoining and Brexorcism via ETSY

SUPPORT our work via Patreon, Paypal or GoFundMe. We work almost 24/7/365 on a suite of projects and need your help if we are to keep going.