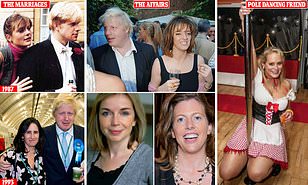 The Joy of Six

If you have six women in your life, it pays to make a law that includes them all to avoid anger, in a specific and limited way. In this article we consider the “joy of six”.

The Pound sustained a six week low as news of Brexit shambles reached the markets.

Six Londoners were either totally depressed about Brexit or optimists in a specific and limited way, for example, if you are a trader who can make money out of other people’s misery as well as their success.

Sir Keir Starmer had six tests for Brexit in 2017. He appears to have forgotten them. We haven’t. He now says that Brexit is done. It is not. See Suspended Animation.

A travel trade group identified six ways in which your travel will be affected by Brexit.

We have now had six rounds of trade talks with the EU. We have achieved nothing. In fact it’s worse than this. The high water mark of Brexit trade deals was Theresa May’s deal. Everyone agrees that, the deal has gradually been eroded since that time.

But Johnson gets to shag six women in a Boris Bubble, so that’s OK then?

SUPPORT us via Patreon, Paypal or GoFundMe. We work 24/7/365 on a suite of projects