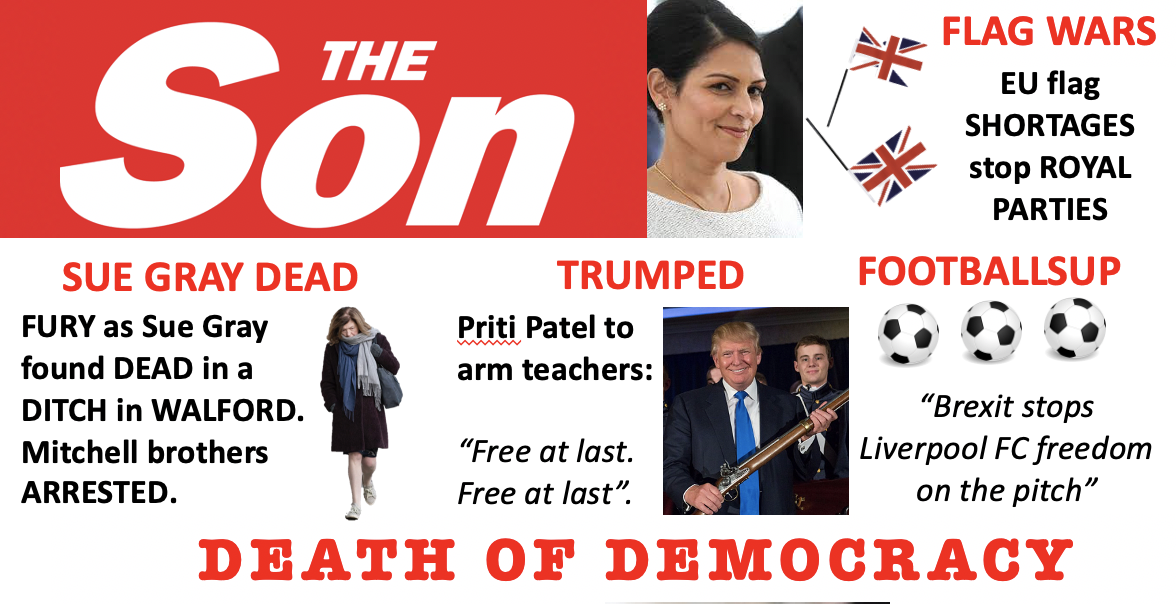 God save the Queen

God save the Queen from Boris Johnson, Brexit and Prince Andrew. Our latest edition of ‘The Son’ previews a weekend of flagshagging. Just in case you are confused, here is a fact and faction decoder:

FACT: There have been bunting shortages[1] for the jubilee!  It does not come from the EU though as intimated in some circles …

FICTION: A pint is not 562 ml.  It is 568.26125 ml.  Millilitres are not the product of EU law but the result if SI units.  Lions are not English even though they appear on t-shirts.  FACT: A pint is not a standard measure as a US pint is not the same as a UK pint with a US pint coming in at 473 ml.  The obsession of the British government with imperial measures is simply another piece of ‘red meat’ to feed to Brexit voters at the jubilee!

FICTION: Sue Gray has never appeared in Eastenders, nor have the Mitchell brothers removed her organs in an East End styled murder.  We are pretty sure that Boris Johnson would have her removed if he thought he could get away with the dirty deed however.

FACT: Priti Patel has not ordered teachers to bear arms in schools as yet.  Give her time …

FACT: Liverpool football fans were held up at Dover for hours[2], as Brexit border controls started to bite hard.  Is this what you voted for when he said we would be “taking back control of our borders”?

FACT: Boris Johnson has cancelled the part of the Ministerial code that holds him responsible if he breaks the law.  The law literally no longer applies to him.  Is this what you voted for when he said we would be “taking back control of our laws”?  Priti Patel continues to try to cancel refugees through sponsored drowning and sending to re-education camps in Rwanda.  Culture secretary Nadine Dorries is trying to cancel culture.  It’s all a bit Reginald Perrin really.  If the going gets tough, Kim Jon Bojo will likely cancel general elections.

FACT: Quite subtlely, Conservative ministers have started to blame Ukraine for domestic problems when the feed through to our economy is largely not related to problems in Ukraine as yet. Rishi Sunak did it at the so-called emergency budget on 26 May 2022 by stating that 80% of our problems were ‘global’.  Horseshit.  Brexit has made an impact of some 4-5% on inflation, all of this man-made and therefore avoidable.  Lee Anderson inferred that the poor were to blame for poverty.  Subtle mentions of Africa in relation to Monkeypox cement the idea that the disease has an ethnic component for feeble racist minds.

FACT: Ireland is not to blame for Brexit.  It is wholly the product of our own government.  We own it.  It’s ours.  100%. Priti Patel has used the spectre of a repeat of the Irish potato famine[3] to feed weak English minds and distract them from the plain facts of Brexit.

God save the Queen from Johnson! Download Prince Andrew is a Sweaty Nonce to tell Boris Johnson and Justin Welby that child abuse is NOT OK. Mumsnet ate Boris Johnson for breakfast the other day. Our analysis of the encounter via the medium of “Just a Minute” follows.