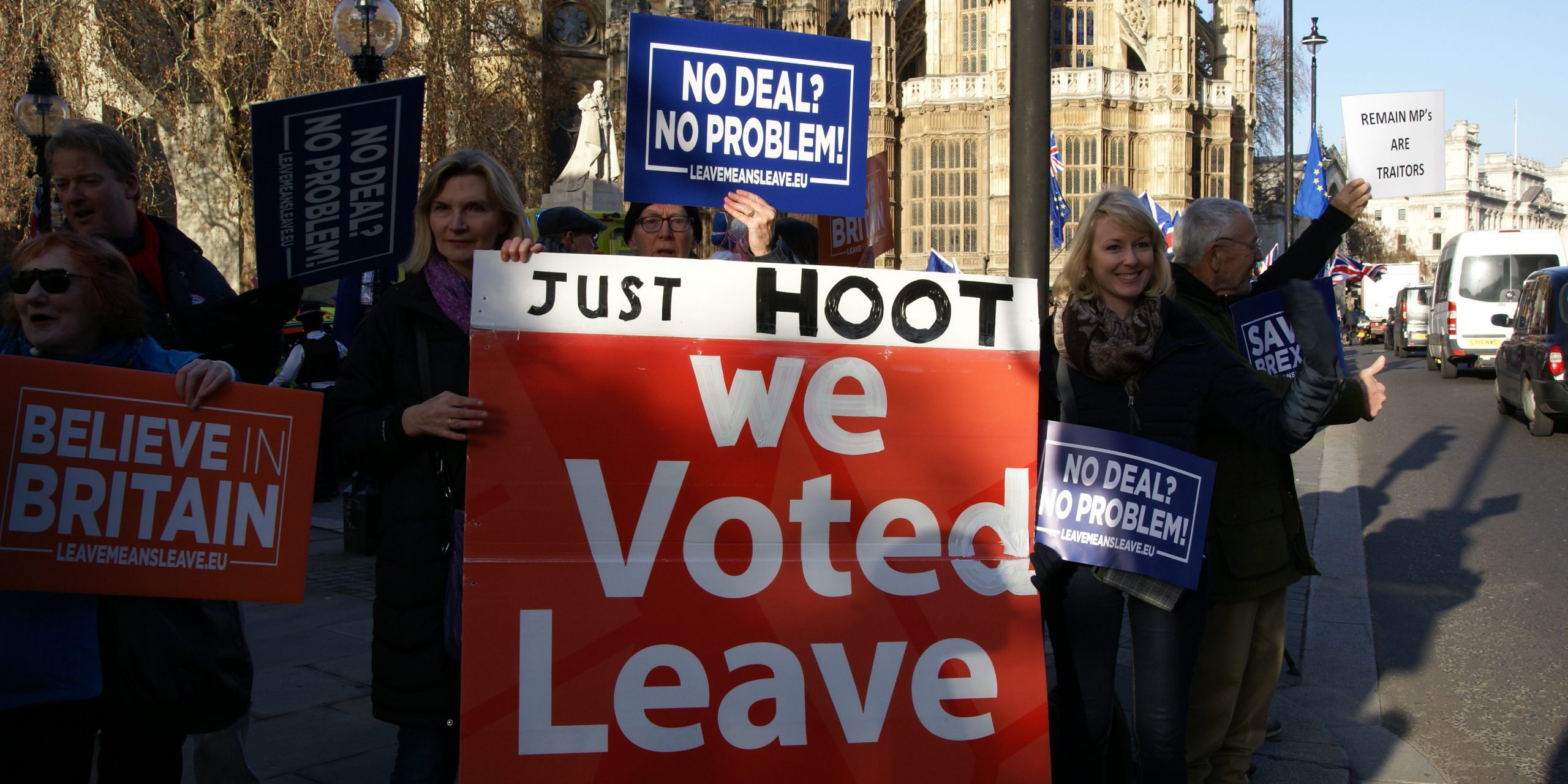 We won, get over it

Fast forward six weeks, and February’s list of unravelling consequences of Brexit is rotting fish, rotting meat, rotting cheese, rotting clothes, custom duties, paperwork that nobody understands how to fill in, proud end of free movement, lost businesses … it’s only the beginning … And an arrogant ‘We won! Get over it!’ turned into an arrogant ‘You won! Get over it!’

Those, whose livelihoods are now being destroyed, wish they had never voted ‘Leave’. Those, who are not directly affected, are still in denial. Can one eat sovereignty?  But irrespective of whether sovereignty and blue passports can satisfy hunger or not, these ‘hard-core’ Leavers are here to stay. They live among us in this deeply divided country: Gammons versus Snowflakes; we interact with them, willingly or otherwise, on a daily basis – butchers, nurses, teachers…

One day, when we rejoin (and yes, it will happen), they will still be here. Can we do anything about them? What can be changed? How? We recognise the falsehoods peddled on social media and know that regulation is required, but that will not happen neither tomorrow, nor next year. Yes, education is the key, but it also takes time, and the process is painstakingly slow.

Can we do anything today?

What should we do?

How can we deal with these people now?

Let’s start with language. Pointing an accusatory finger and gleefully declare each time ‘We told you so!’ does not help. No matter how much we are reeling inside, it is up to us to be a grown-up in this relationship. And as a grown-up, when dealing with an unreasonable child, we are to adopt a different vocabulary, use different terminology. Forget ‘Brexit’, it’s got done. Let’s ‘build back better’, but build it to benefit everyone.

Let’s drop the argument and change the subject. No, we do not need to forget what’s happened, but as a grown-up, we must be able to hold a civilised conversation and engage in constructive activity. We can draw on precedents: before the Good Friday Agreement many ‘peacebuilding’ projects avoided any conversations between Catholics and Protestants about politics, but built community centres, put up Christmas lights and organised job training for young people. The projects can be dull, narrow, specific, but would benefit everybody. It does not mean we have to like those, who voted Leave, but we will be able to work alongside them.

By finding common ground in language and deeds, we will move forward, and restore, realign and rejoin.

Obvious attacks on Brexit or the Tories, or Farage are unpopular but if you denounce a result of Brexit by stating that this is not what was promised, or that it’s the result of the government’s poor policy choices, then there will be agreement. (Be more nuanced with Leavers and let them save face).

Find different vocabulary, which does not inflame the issue.

For more on language, read our book on changing minds about Brexit

The same goes for cross-community discussions about infrastructure…The topics can be boring, they benefit everybody. Make the problem narrow, specific.

How to invite the leavers to conversations? Work with trusted messengers, people who have authority within the seditious community, who sympathise with its shared values but are nevertheless willing to talk their comrades down from the brink.

Most are in favour of economic links with Europe (eg. EEA, Norway, Switzerland models). What they don’t want is the idea of the “EU dictatorship”, EUSSR etc. (it’s an emotive issue, so focus on single market membership as a first step).

By finding common ground if we want to Rejoin one day. Don’t just demonise them – it’ll achieve nothing.’