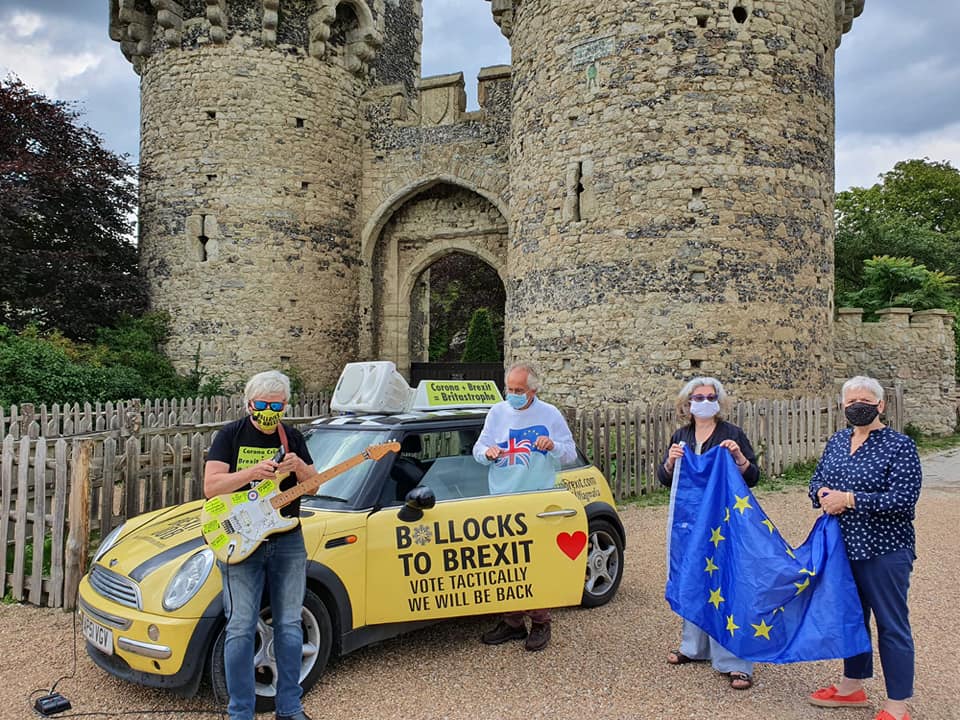 Today we visited Cooling Castle, home of Jools Holland with the Bollocks to Brexit Mini Cooper. Here is a report from our resident maritime consultant and Brexit sea dog Don.

I arrived at the rendezvous at 5 bells in the Afternoon Watch. That is 14.30 for landlubbers and when the big hand is on the six and the little hand is on the two for Gammons and Tories. My fellow Saboteurs came separately. For those who have not been paying attention “Saboteur” is the term of derision that Gammons and Tories chose to refer to decent people who oppose Brexit. The term quickly fell out of favour in Gammon and Tory circles when we pointed out that “Saboteur” was what Vichyites called the French Resistance. Comparing me to the French Resistance is about the nicest thing anybody ever said about me. I took it as a compliment: Vive les Saboteurs! “Vive la Resistance” Merde a Brexit!

The Bulwarks to Brexitmobile led the convoy and we drove around the environs. We set up a stall in Gillingham High Street near the church and our musical director set up his gear and serenaded us with anti-Brexit music. I chose a spot where I could keep a look out for Gammons, Tories and nobbled coppers. We did not hand out leaflets for social distancing reasons. I saw somebody advance purposefully towards our musical director. I thought I might be needed but I did the newcomer an injustice. He wanted to get involved. Took a couple of our flags and joined in the fun.

A few people gave filthy looks and made vulgar gestures then moved on quickly. For the most part people were supportive, gave the thumbs up and wanted to photograph us. After a while we set off for Rochester. It was much the same there. Some people walked off pointedly refusing to look at us while others gave the thumbs up. By this time my old knee injury was playing up so I decided to call it a day. I can walk for miles and feel better for it but standing around plays havoc with my old injuries.

People in Ashford are unhappy about recent developments. It has sunk in that Brexit is going to cause delays at Customs so this hopeless inept government is setting up a huge lorry park for stranded trade vehicles. The site had been chosen for a new Amazon facility that would have provided employment. Instead they are going to get trucks belching diesel fumes because the drivers will need to run the engines to keep refrigeration plants working. That will not improve the atmosphere at all. This is not the earthly paradise that the people of East Kent thought they would get when they voted for Brexit.

Tomorrow we go to Tunbridge Wells on a circular tour starting at 11.00:

There remains a possibility to visit Hythe and East Kent later on tomorrow.

One thought on “Later with Jools Holland”