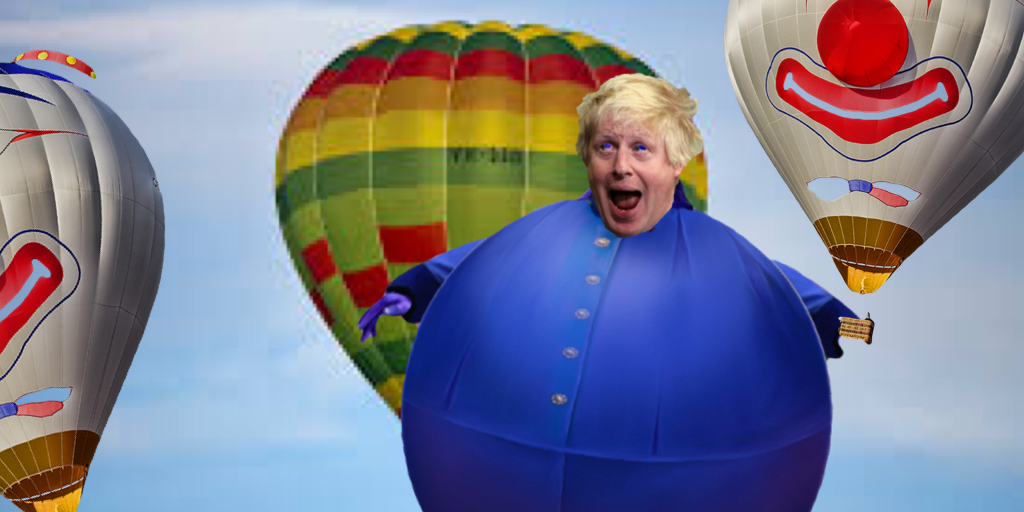 Today, Boris Johnson will promise to power the UK with wind by 2030. In particular he promises £160 million in ports and factories across the country to manufacture the next generation of turbines. Malcolm Miller helpfully points out that this is about “half a footballer”.

It’s an ideal time for Boris to harness the winds of change. While he hasn’t quite blown it with the electorate, some of his back benchers have really got the wind up recently: at his inability to provide leadership, to offer a strategy or fulfil the simplest 3-word pledge. Now, perhaps it’s time to “Make Britain Whirl-beating”.

Since he was a cub reporter in Brussels, Johnson has always been a fan of hot air: from the supposed ban on prawn-flavoured crisps, to a fabrication on euro-coffins, he’s always known the power of a good wind-up. As a man capable of fabricating ‘an inverted pyramid of piffle’ on a whim, we’ve seen his promises on a checkless border for Northern Ireland, an oven-ready Brexit deal and 40 new hospitals for the NHS. Ireland is an unsolvable conundrum, the oven-ready deal’s in the bin, and 40 has shrunk to 6. So, how many times can a man talk up an empty pledge, before he can die in a ditch? Perhaps the answer, my friend, is blowing in the wind.

Whilst a blow-by-blow account of Boris’s lies has inflated more blogs than your average gas-bag, let’s look at few choice outbursts:

Let’s take back control of our fish.

There will be no checks on goods coming and going to Northern Ireland.

If I don’t get Brexit done by Halloween, I will die in a ditch.

I’ve had to give drinking up until Brexit is done.

When we leave the EU we can ban shark fin soup.

“Operation Moonshot” (millions of Corona tests with results within minutes) will see mass Corona testing by November. He did not say how many minutes or which year.

When we leave the EU we can have straight bananas.

“I didn’t make any remarks about Turkey” in the referendum”, after indicating that Turkey (population 76 million) is joining the EU.

I will lie (sic) down in front of the bulldozers at Heathrow to stop them building the runway. Instead he was AWOL at the vote.

There may be bumps in the road with no deal.

“I have not had an affair with Petronella. It is complete balderdash”.

Of the tests conducted at the 199 testing centres, as well as the mobile centres, they’re all done within 24 hours.

We will have a world-beating “test and trace” system by 1 June. Johnson did not say which year …

If you have lived overseas for 15 years Britons, unlike other foreign nationals, get no vote. Boris promised to abolish this law / rule when he came to power.

[20 000 people died unnecessarily in care homes] because too many care homes didn’t really follow the procedures in the way that they could have.

We will beat the virus by Christmas. He did not say which year …

We’ll help everyone cycle via the fix my bike scheme. The website broke on launch and then they said the scheme had closed.

And some surprises we did not expect:

A hard border in Kent and a “passport” scheme for people driving to Europe.

On Muslim face veils, Johnson said it is “absolutely ridiculous that people should choose to go around looking like letterboxes”.

Johnson backed a failed plan for a “floating paradise” across the River Thames wasting £43 million of your taxes. A mere trifle in comparison with the £200 billion blown on Brexit so far.

Boris has always favoured breezing through life with no responsibility. But with 15,000 test results lost, 70 mile lorry queues predicted for Kent, and power cuts predicted for next year, perhaps the time is coming when he might reap the whirlwind after all.

Ask your MP to act to suspend Brexit