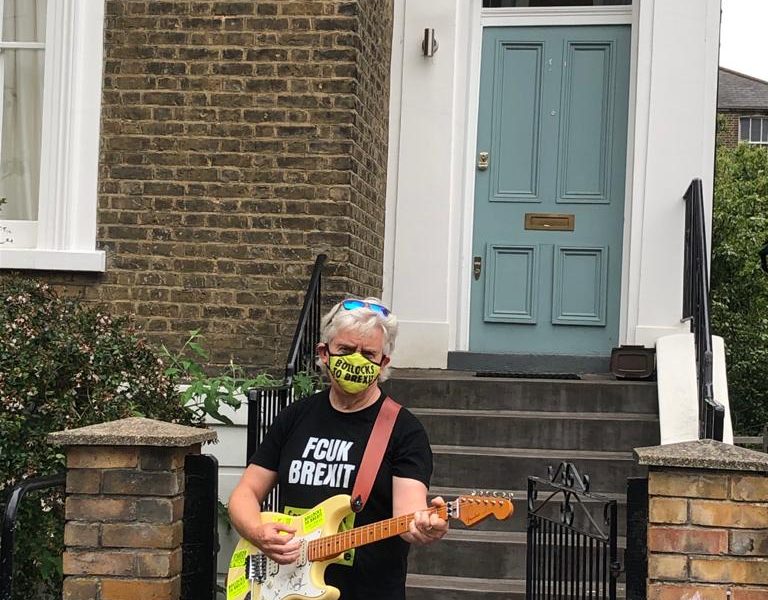 Here are the details of our marathon road trip from Islington to Old Durham Town … in the B*llocks to Brexit Mini. Please support the venture via Go Fund Me.

The “B*llocks to Brexit” Mini Cooper known as “Johnson” is making an unprecedented historic trip from Dominic Cummings house in Islington to Durham under strict COVID-safe conditions, so that the driver Peter Cook can get his eyesight checked.  Peter is taking the excursion from Islington to Barnard Castle for his wife’s birthday and will be stopping at a few beauty spots along the way.  The trip, inspired by Dominic Cummings, has been arranged by EU Flag Mafia in conjunction with Rage Against The Brexit Machine, to highlight the problems of adding Corona crisis to Brexit disaster, creating a “Britastrophe”.  We will be performing songs from our catalogue of anti-Brexit songs, including ‘Alo Vera – Brexit’s Comin’ ‘Ome and a Chas & Dave Cockney Brexit Knees Up.

Peter hopes that “Dick and Dom” aka Boris and Dominic will hear our call that this is the worst time to take Brexit out of the microwave.  If they checked their eyesight, they would now realise that there is a substantial gap in the will of the people, with nearly a ten-point gap of people now wishing to remain a member of the EU.  All that is needed is courage and political will to change the oncoming “Britastrophe”.

@ActionFbpe @BrexitRage @CazalyMary He doesn't know his left from his right, his right from his wrong.

The bakers used a lot of soya sauce in the first challenge on #GBBO, so it's a good thing it will be made cheaper thanks to our trade deal with Japan 🇯🇵

Out and about earlier tonight in London. Leavers now keeping their heads down.... only thumbs up, waves and cheers from remainers.

Feeling depressed, downhearted, and demoralised. Tell me why I have reason not to?

Please can we send Boris to a private island?

Such a fabulous deal with Japan that - shock horror! - the price of soy sauce after Brexit will cost ..... wait for it ...... the same as it does now.
But they lied about it https://www.originalfm.com/news/headlines/brexit-department-for-international-trade-in-soy-sauce-row-after-great-british-bake-off-claim/