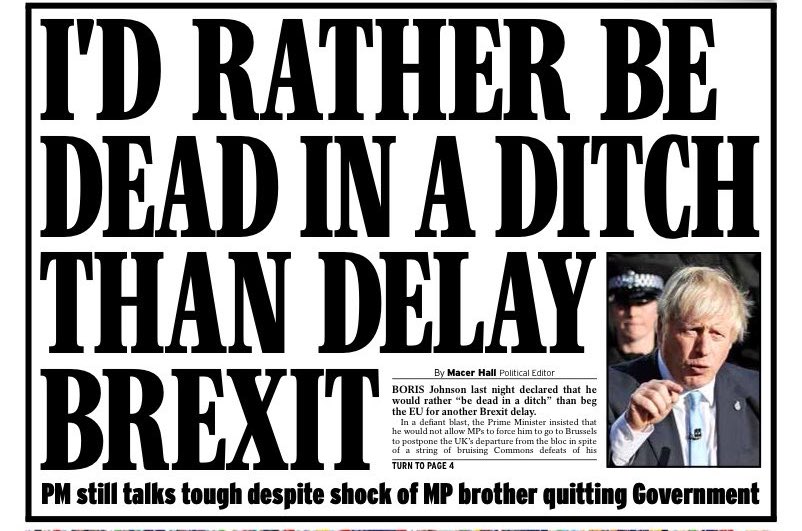 Here is a roundup of Brexit news in case you are bored with COVID apathy. Remember COVID is a crisis. Brexit a disaster in slow motion. Brexit will make the bigger impact on our country in the long run. The toxic combination of Corona + Brexit = a Britastrophe. We must pull back from a Do or Die Brexit. Your ditch awaits Mr Johnson.

Down on the farm

I watched with dismay, as Parliament voted to lower our food standards. This opens the door to hormone fed beef, chlorinated chicken and a host of other dodgy practices. In case you think this doesn’t matter, US cases of food poisoning are some 10 times higher than our country.

I have mixed feelings about the farmers. I helped Liz Webster, PPC for Swindon, gain the only TV coverage for the Lib Dems in the entire South West in 2017. Liz organised the farmers marches. I attended the last event to be told that they did not wish to mention Brexit, as the issue was toxic. Instead they protest to save themselves. Parochial self-interest is a hardy perennial problem of Remain. There is a hierarchy of problems here with Brexit at the apex. In other words, stopping Brexit leads to solutions to other issues such as food standards, EU citizens rights and so on. But people would rather form into silos (sic), allowing our Government to operate “divide and rule” politics. Oh well, the farmers have been composted and we all lose.

We’ve had “Do or Die” and “Die in a Ditch” from Boris Johnson, so we may as well have “Die Another Day” or “Live and Let Die”. Brexit negotiations remain deadlocked. Johnson is trapped by the ERG on one side, funded by Russia and wanting No Deal, which nobody voted for. He is also confounded by the EU, who must satisfy the four freedoms and protect their enterprise. It is always unwise to capitulate to bullies. The EU cannot give Britain a better deal for less money, as it will threaten the cohesion of the other 27 member states. I covered this point in the post Brexit Choices.

Why then are the negotiations deadlocked? Quite simply the “mechanics” of Brexit remain unresolvable. By moving one part of the puzzle to resolve one issue, the other parts become entangled. It’s what we call a “Wicked Problem” in consulting circles. Wicked problem do not lend themselves to simple solutions as Boris Johnson would like to believe. As reported last year, changing the leader or applying more “bluster” does not alter the underlying problems that exist with Brexit.

The latest instalment of industrial scale lies and gaslighting comes from yesterday’s COVID announcements. With £40 Billion worth of tax rises now inevitable, let’s examine some COVID facts that Boris Johnson must have missed whilst chasing a violinist …

Professor Chris Witty told the Government that that the latest COVID rules will not be enough to contain the virus. Ignored.

Keir Starmer has just asked the Prime Minister to follow the science and install a 2-3 week circuit breaker across the UK. I predict he will either be ignored or blamed for the deaths already baked in by Johnson’s lack of action from mid-September, when he was talking about “Getting Christmas Done”. This is a repeat performance from February, when Johnson was more concerned with bonging bells, shaking hands and minting 50 pence coins than running the country.

Test and Trace is still not working, despite Matt Hancock promising to get it up and running many months ago. Without measurement, there can be no management of COVID and the idea of “Controlling the Virus” is at best fanciful, at worst dangerous.

In case you think that the idea of unnecessary deaths are a feature of Brexit, please read what Wendy Novak has to say on the matter at Brexit : A matter of life or death.

Meanwhile £3 BILLION of your taxes has mysteriously disappeared on Government COVID contracts handed out to friends and cronies.

And Johnson now does not want to appear in front of the public, having hired Allegra Stratton to handle “comms” so he can move on to pursue more important matters.

The lesson for us all is neatly summed up by James O’Brien:

Do or Die Brexit in a ditch Johnson?

What are you waiting for?

Read the latest article from Re-Boot Britain - Rage Against The Brexit Machine https://brexitrage.com/shock-and-awe/

In response to all the excellent advice to grow our own vegetables, I have started an allotment. The beetroot is a little stunted though, perhaps it is a dwarf variety?

@MattHancock @PrueLeith Will Prue be making these Brexit meals for the famine?