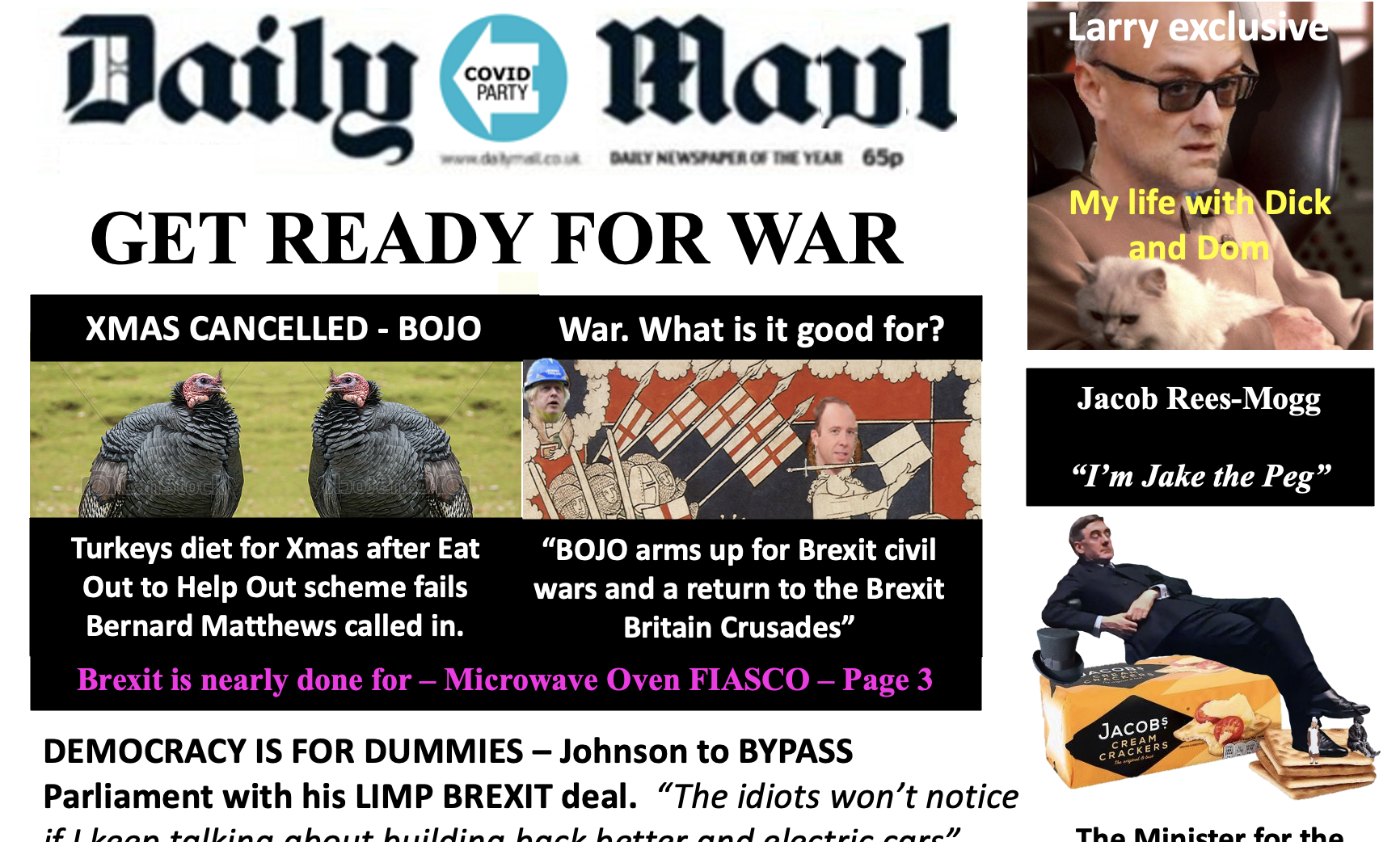 Get Ready for The Brexit Wars

In case you are unaware occasionally we parody the immense stupidity and lies from populist newspapers. Here is today’s edition as we get ready for the Brexit wars. This includes some fact checking below, in case you are unable to separate Brexit fact from fiction.

Conservative MP George “Useless” Eustace told farmers to switch from Sheep to Cows in the wake of almost certain bankruptcy in the face of 35% tariffs on Lamb. Useless Eustace also told Danish firm Lurpak to move production of their butter to Britain. Sadly Lurpak pointed out that it would be illegal. In any case, why would they wish to locate themselves in Brexit Britain?

Boris Johnson has suggested that Parliament will not have time to approve a Brexit deal. So, when he said “Take Back Control”, he meant for himself rather than Parliament or the People. In the words of Johnny Rotten:

Ever got the feeling you’ve been cheated?

Farmers fear that the turkeys they are rearing will be too big for Christmas. Some (turkeys, not farmers) have in fact been put on diets.

Johnson has summoned up more jingoistic rhetoric about war with his announcement of more money for our military. This amounts to more distraction from COVID and Brexit. And like most of Johnson’s announcements, it’s not quite what it seems …

Minister for the 18th Century, Jacob Rees-Mogg did quote Caractacus on Parliament the other day, but did not make an explicit connection between Rolf Harris and his song The Court of King Caractacus. Unfortunately many other people did. Please reply to Jake The Peg …

Meanwhile, it has been reported that 62% of British people now want to stay in the EU. 60% of people feel that the EU has handled the pandemic well.

In the ultimate irony, it seems that “forins” will be manning the border posts if Brexit proceeds. They very thing that Brexiteers wanted will not come to pass and they will have their blue passports inspected by Romanians and Indians. Oh, the joy on their faces!

A book on Brexit has been released. Entitled “The Benefits of Brexit“. The book contains 234 BLANK pages. Some Brexiteers are outraged, having bought the book to find it devoid of inspiration. Here’s my review:

If you want a good book on how to have difficult conversations about Brexit around the Slimfast Christmas Turkey, please find our book on Brexorcism on Amazon.

Write to MPs and the European Union. Ask them to help Suspend Brexit in the wake of Corona.

Read our article on Suspending Brexit and share widely.