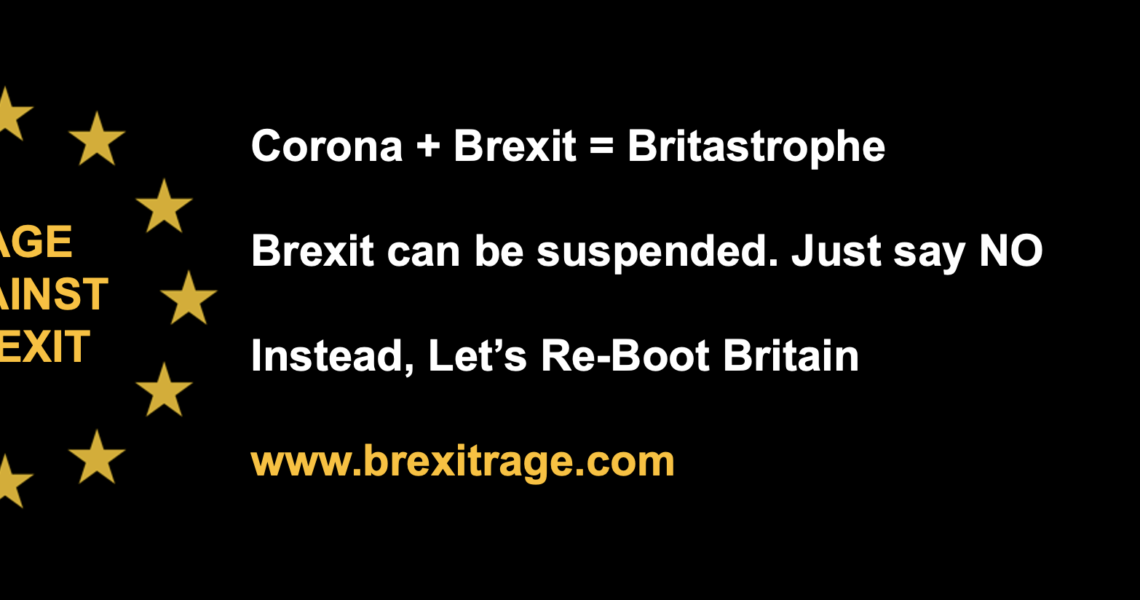 We should not underestimate Johnson’s regime’s staying power. It has shown the determination to ignore demonstrations in London of over one million people, and  large demonstrations in other cities, at a time when  they had no parliamentary  majority and had to face a general election. Now, with a majority of over 80, they will not yield to the sort of soft pressure exercised by central movements in Millbank such as March for Change and The European Movement. I fear they may well try to tough it out even in the circumstances which you predict, using fake news and propaganda. In that case, the only thing which will shake them is loss of electoral seats. But the general election is still nearly 4 years away and by that time the electorate may have been conditioned to live with the status quo. It even remains in doubt that another election will happen now that The Kremlin is involved in day to day government of this green and pleasant land.

JOIN US EVERY WED 8 pm TO RE-BOOT BRITAIN

However, next year there are the County Council elections as well as Borough and District elections postponed from this year. Some will no doubt say “Oh, but those are about local affairs and shouldn’t be mixed up with national arguments ”. This is of course rubbish, as any political commentator will tell you. Number 10 and party HQs are sensitive to the results even if they pretend otherwise. These give us an opportunity, and we have time to plan, organise and soften up the targets.”

There would be no need for us to put up candidates. Instead, we, as “REBOOT BRITAIN“, would be an unregulated campaigning organisation, inviting voters to vote for anyone (or no one) provided they did not vote Conservative. We would produce literature, using all the strongest arguments we can muster (and we already have a legion in our records). As I read the Electorate Commission’s rules – and I have done so several times – we would not have to register with them if we did not intend to spend over £20,000 in the pre-election period and could do what we like provided we didn’t break the ordinary laws of the land. Preparatory work is needed, but I would volunteer to be chief donkey. Peter Cook has offered to help with strategy and communications to help us punch above our weight. There are rewards too. We are dealing here directly with electors of all persuasions, including those averse to using social media. We don’t have to rely or newspapers who all too often, in my experience, refuse to publish those letters which really nail the opposing arguments.  Instead, we would go direct to the public via blogs and other direct means. Astonishingly Peter gained supporters by specifically asking people NOT to vote for him in the 2019 General Election. Finally, our campaign will offer real, measurable results within a year. This will provide our supporters with a real incentive to leaven the status quo by choosing differently from the herd.

Will you join us? Will you help Re-Boot Britain?

Join us on ZOOM every WED at 8pm

Editor’s footnote – Adrian’s efforts in 2019 helped to cause a 6% drop in a Brexiteer MP’s share of the vote and a fall in his majority. This even caused the BBC to comment!

And finally, a word from Julie Ward from the European Parliament:

In case your eyesight is compromised through driving, this is the text of Julie’s letter:

Barnard Castle continues to be the focus of enormous attention since Dominic Cummings made his illegal trip to the town on Easter Sunday, an action which undermined the government legislation that Cummings himself helped to shape, thereby contributing to the general public’s disregard of government guidelines and undoubtedly increasing the number of coronavirus infections and deaths from Covid19.

Last Sunday the town saw a visit from musician, author and entrepreneur Peter Cook, of the Academy of Rock. Peter, who normally lives in Kent, is currently touring the UK in his iconic yellow Mini-Cooper which bears slogans warning the general public about the disastrous impact of multiple crises. His trip to Barnard Castle included a spontaneous concert for passers-by accompanied by campaigners from NE4EU who also gave a rendition of the Lambton Worm. Other people joining Peter in the town were members of Leeds for Europe and pro-EU groups from Herefordshire and the Midlands. As well as entertaining and educating passers-by, the group also posed for photos outside Spec Savers wearing Dominic Cummings masks and witty T-shirts bearing the imprint “HM Govt Approved Eye Test”. Passing traffic tooted in support and lots of people went off wearing stickers bearing the slogan – “Corona Crisis + Brexit Disaster = Britastrophe”.

I know how much our communities enjoy live music – from teen fans to ageing rockers, music is an important part of our lives. Like all those working in the industry Peter Cook understands well the disastrous consequences of Brexit on the arts and entertainment industry which will make tours much less viable resulting in fewer opportunities for fans to see their favourite bands, and ultimately fewer bands making less music, and also less money for the treasury.

It is no surprise that the Musicians Union supported the UK remaining in the EU. The loss of Freedom of Movement is a tragedy for all of us but is of particular concern for touring artists and for young people, many of whom were denied a say about their future.

Now, as the government threatens to drive us off a cliff with a ‘No Deal Brexit’ at the end of the year in the midst of an almost certain second wave of coronavirus infections, please make YOUR voice heard by writing to your MP and insisting on a detailed response to your concerns, not cut and paste Cummings-speak. You can also support Peter Cook’s campaign to ‘Reboot Britain’ here – www.brexitrage.com

I will also add that In my view these restrictions on trade will be dismantled in future, industry by industry, one by one, as people decide they do not want government to be the arbiters of how and when and where they do business.

This is a VERY important point. By ‘take back control’ what has actually happened is that the control citizens and businesses had (in this case musicians but see also fishing, finance etc etc) has been taken FROM them and given TO governments (both U.K. and EU states). https://twitter.com/lewis_goodall/status/1351522573910224896

Again, music a microcosm for what "taking back control" means and where control now is. It's been removed from individual musicians and businesses (no longer free to operate across EU) and been returned to the UK nation state/EU which now control who comes, does what and when.

Govt is stoking up culture war with a torrent of fake news & dead cats, 'cos that's all it's good at. Different types of fake news we've had in the past week include mud slinging, hoax stories & dismissing real news.

The ‘faces for radio’ coming to a TV near you

...in case you weren’t satisfied with listening to Nick Ferrari heavy breathing down the airwaves, now you can watch it too

Andrew Parnall 💙- It's all a bit shit, innit?@dontbrexitfixit·
18 Jan

Dear Mr Johnson @BorisJohnson, I am wondering if Brexit dividends could be issued as stamps that we can stick into a book? Then we can redeem occasionally for treats like oranges and chablis, maybe even some real halloumi.

Has the fish protest been mentioned on the 10 o’clock news on any channel?