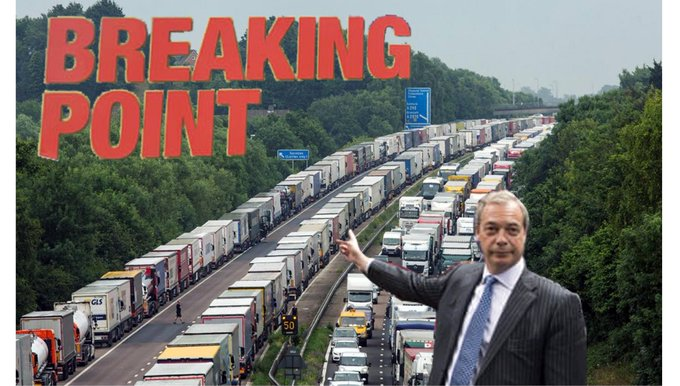 Not in my back yard

I deplore NIMBY-ism (Not In My Back Yard).  It typifies the English condition. It is an underlying cause of our Brexit vote (fear of foreigners, “my home is my castle”, Rule Britannia and so on).  We experienced a small dose of NIMBY-sim in conversation with the good ladies of Deal on Sunday. We took the seaside town by storm with some candyfloss and cockles.  Although the women we spoke to voted for Brexit, they demonstrated typical English parochial self-interest:

“If it does not affect me, I don’t care”

Yet, even these fine women had changed their mind about Brexit. They realised that their quaint town will be filled with lorries from Dover shortly, under any Brexit deal.

So, I cannot help reflect on the looming case of NIMBY-ism about to befall my fellow men of Kent and Kentish women.  It was announced on the BBC that 7000 lorries would soon be blocking the roads in Kent and the South East.  This represents a single lane queue of some 72 miles, stretching approximately from Dover to Greenwich, Gatwick or Guildford.  Of course. it won’t be a single lane queue though …

No, it will be worse than this.  About 18 months ago, I spoke with some Councillors at Kent County Council who had undertook some serious road planning for Brexit.  Their studies indicated that, in the age of SatNavs, people would attempt to use villages and B roads to beat the jams.  Just a few people doing this will effectively block most villages in East Kent.  They concluded that big towns like Folkestone, Dover, Ashford, Canterbury, Whitstable, Thanet Maidstone and The Medway Towns would be gridlocked.

Does it get worse?  Of course it does.  Once minor roads and villages are gridlocked, teachers, carers, nurses, business people etc. will be unable to get to work.  Their children will have to stay at home.  Contagion dictates that the impact of Brexit is very much in your back garden (and everyone else’s). Today it was reported that Kent will have an internal border something like the island of Ireland, with fines and police enforcement for lorries without the correct papers. Yet, we don’t have enough permits or customs agents to provide the said papers! Michael Gove says it is business leaders that are to blame for this. I rather think it is Michael Gove for not building capacity and capability.

You may well say, we knew that Brexit would make things worse.  Well, consider these further facts of life from my experience as a pharmaceutical scientist and business person.  90% of our food supply comes from Europe, especially in winter.  Much of it relies on cold storage (cook-chill, fresh food and so on).  So that means that much of our food will stand rotting on the M20 and M2, if Kent County Council’s scenarios come to pass.  The leaked Government report predicts up to two days delay per lorry in Kent and the South East.

“No problem, I don’t eat” you may say.  Well the problem extends to people who need healthcare, as many drugs are imported and some also crucially rely on carefully controlled temperature conditions.  Others have limited shelf lives anyway.  Radioisotopes literally rely on limited half-lives, especially technetium generators, which are the mainstay of UK nuclear medicine scans.  This means that babies and vulnerable people will die for Brexit.  Still happy with half a life? Will your child settle for death, in order to deliver a windfall to Jacob Rees-Mogg?

Boris Johnson has just announced extreme measures for social control to suppress resistance to Brexit chaos.  Are you still happy about this?  If you voted to Remain, are you simply going to lay down and pretend to be dead, based on the notion that spaffer Johnson popped Brexit in the Microwave, Gas Mark 4 on Halloween, then again on December 12 2019 and finally on 31.01.20? if you voted for Brexit are you now beginning to think that Johnny Rotten was right:

“Ever had the feeling you’ve been conned?”

Project fear I hear you say?  No, I’m afraid this is project fact.  Whether you voted for Brexit or not, my guess is that you did not vote for lorries in your back yard.

It is necessary to suspend Brexit in such drastic circumstances.  Corona has contributed a 12% decline in GDP with Brexit predicted to add between 5-11% more.  We have to endure Corona as a natural phenomenon, but we don’t need to add Brexit to create a “Britastrophe”, as Brexit is a man-made phenomenon.  The economics don’t just add together to produce approximately 20% loss of GDP by the way. In any case, it only took 3.5% GDP loss to produce the 2008 crash. Do you really want this for your kids?

Write to your MP today. Ask them to push for a suspension of Brexit using this article

8 thoughts on “Not in my back yard”