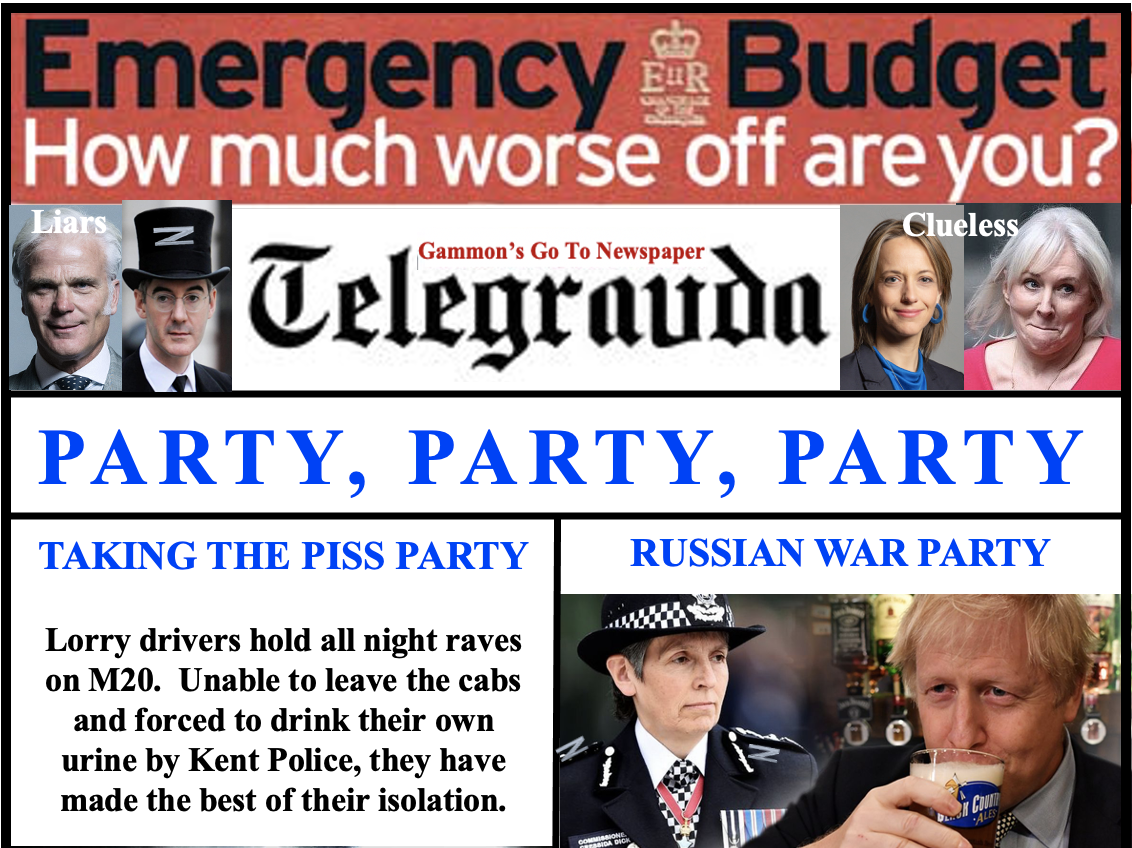 It’s Party Party Party in the Telegravda. Come on down and celebrate death by Brexit. Taken from a forthcoming book on the Kafka-esque political world in which we now operate.

FACT: Drivers stuck on the M20 [1]are not allowed to leave their cabins to urinate or defecate by Kent Police, so that traffic can continue its slow grind towards Dover. It’s not Party Party Party if you are stuck in your cab with a bottle of urine and a pile of Brexshit on the floor.

FICTION: The M20 has not been turned into a rave venue and the drivers are not drinking their own urine during ‘Operation Pisspot’[2].

FICTION: Sue Gray has not shown up in Ibiza.  On the other hand, her report on leadership failures has disappeared without trace.

FACT: Johnson’s leadership is disliked by 72% of the population with the most frequent word mentioned about him being LIAR.

FACT: Let’s play the party game of ‘closets and skeletons’ whilst the drinking continue into the night:

Rishi Sunak defended Mrs S of her absolute right to legally pay as little tax as possible to the country that supplies her with the house she lives in.  She was part owner of Lava Mayfair Club Ltd[3] (a private membership gym), which collapsed last year, owing almost £44 million to creditors, including £374,000 to HMRC.

So, Sunak introduces the furlough scheme … and the woman he’s sleeping with benefits by up to £635,000.

Sunak oversees the UK rules regarding non-Dom status[5] … and the woman he’s sleeping with benefits by over £20 million.

Sunak is supposed to be in charge of ensuring that the UK maximises its tax take…yet the woman he’s sleeping with has overseen companies going bust owing £789,000 to HMRC.

Sunak says his wife’s tax affairs are none of our business!  Never mind, let’s party like it’s 1999!

[2] BBC Have I Got News For You on EU TUBE www.youtube.com/c/PeterCook1001

Most MPs will get two lots of £400 as they have 2 households. Anyone know if MPs energy bills on their 2nd homes are covered by an allowance (paid regardless) or an expense requiring a receipt?
I’d just like to be damned sure they can’t pocket the second £400 & claim it too!

@BrexitRage @AnnelieseDodds And @UKLabour would win it by a mile if it got real & started challenging Tories over the #BrexitDisaster. Polls show most people, inc most Lab members, now believe #BrexitHasFailed & we need to #RejoinEU - Lab should start listening to them. http://Therejoineuparty.com @RejoinP