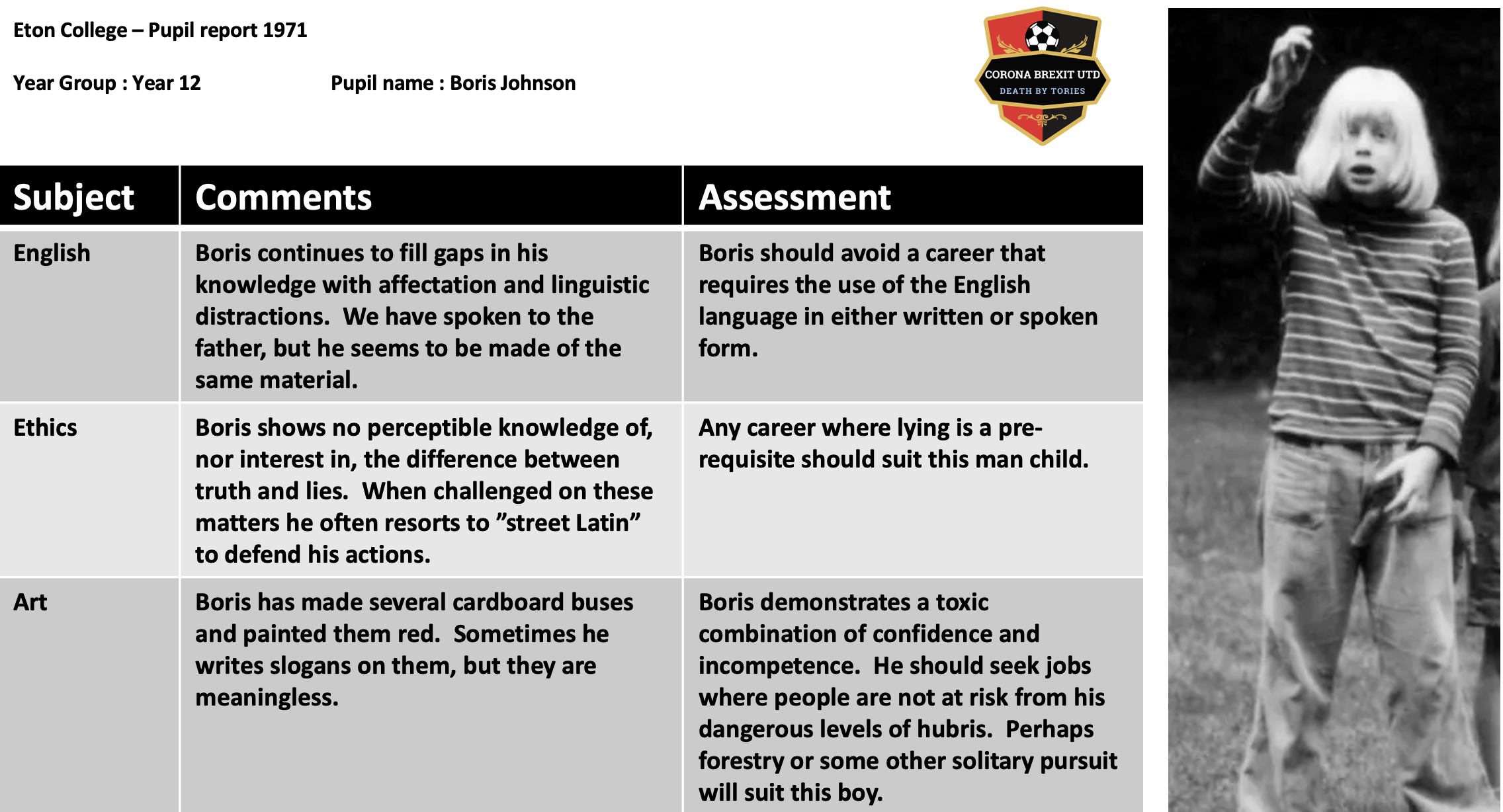 This is a kind of “end of term” report for Boris Johnson and the Conservative party. The Prime Minister has gone off for another summer rest. Well deserved? Adrian Ekins-Dauke’s invites you to judge for yourself:

THE RUSSIA REPORT: FUNDING AND MISINFORMATION

Ex-Russian intelligence staff say 85% of their work is not spying, but “political funding and misinformation”. Since 2012, the Tory party has received almost £3m in donations from members of Putin’s cabinets and 14 current ministers have had donations from individuals or companies connected to the Russian leadership

The government delayed the release of the Intelligence Committee’s report on Russian interference in Brexit for 9 months. The reasons given for the delay were described as “simply not true” by the Committee. Our Home Secretary, Priti Patel said the Russia Report could be ignored because it was now 9 months old and “out of date” (One wonders whether she takes a similar view of unresolved murder, rape and other serious cases which become “out of date” after 9 months).

Matt Hancock boasted he had met the targets on his “six tests” on COVID-19. In fact 4 of the 6 targets were missed, one target couldn’t be met because it had never been defined, and one “relied on a definition [that] does not reflect practice”.

The cross-party Public Accounts Committee found there was an “astonishing failure to plan for the economic impact” of COVID-19. It also said the policy of discharging patients into care homes was a “reckless and appalling policy error”. It called the government “slow, inconsistent [and] negligent”. The Committee chair said “A competent government does not run a country on the hoof”

£108m to PestFix, with just 16 employees. PPE not delivered.

£10m to Medco Solutions, incorporated just 3 days after lockdown, with share capital of (not a typo) £2. PPE not delivered.

In all, approx £1 bn to inexplicable suppliers for PPE that hasn’t been delivered. This of course costs lives.

A Nuffield Health study found after 10 years of “chronic underinvestment”, UK is at the bottom of the league table for health resources, diagnostics and surgery by the NHS will take 4 years to return to pre-COVID levels.

The government’s “world beating” test-and-trace programme was described as “scandalous” by the British Medical Journal, and found to miss its 80% target in every COVID hotspot announced last week

A report from London School of Economics has shown a WTO Brexit will shrink 16 out of the UK’s 24 industry sectors by up to 15% each. Permanently. A Tory MP tweeted:

Another pro-Brexit Tory MP with a grasp of what’s to come tweeted:

“my strong advice is: “take the chance to live abroad”.

The cross-party Media & Culture Committee has reported that “government has consistently failed to recognise scale of challenge facing culture, sport and tourism and had been ‘too slow’ to respond to their needs during COVID-19.

Boris Johnson launched a “Fix Your Bike” voucher website. It broke within an hour. The editor applied and found that the website did not work. I called the people and was promised vouchers. On following up I was told the scheme was closed.

Johnson also said we should all lose weight. This is certainly true in his case at 17 Stone. However, Johnson is still issuing vouchers to help us buy burgers.

It was revealed the government spent £400m buying a bankrupt satellite company, OneWeb, to replace the Euro GPS system we have lost due to Brexit. Months before, a study by MIT found that OneWeb’s tech is 6 times less efficient than the EU solution: the worst of the technologies studied.

In June, the government guaranteed that there would be no cuts in overseas aid when the Foreign Office and International Development Dept merged. It announced cuts of £2.9 bn in aid on the day Parliament broke up for the summer, thus avoiding questions on broken their promises.

The government has permitted your health records to be given to Palantir, a large US data-mining company and to Faculty, owned by an associate of Dominic Cummings and said to have worked with Cambridge Analytica on Brexit.

Our overall assessment of the Government is 2/10. What’s yours?

Write to your MP and make these points. Ask them not to add the man made disaster of Brexit to Corona Crisis.

Join our network to Re-Boot Britain.

What troubles me most ?

You know what really troubles me about our Government? It’s the fact that nobody gives a damn about being lied to on a daily basis. My own brother typifies the condition known as learned helplessness, when he points out that he was lied to in 1996 about his pension by the Government and so he now expects to be lied to on a daily basis. Although he voted to Remain, he has swallowed the lie that we must not interfere with the “will of the people”, nor does he understand how he might go about this if he did.

Mike Cashman devised an interesting way to test the nation’s agreeableness to being lied to with his “acceptometer”. It asks you to decide whereabouts on a Likert scale you are prepared to accept being lied to on a daily basis by politicians. Test yourself on this simple example:

It occurred to me that this very dark piece of music I wrote a while back sums up the essential value conflict that Mike speaks of. In the piece Nigel Farage reflects on the poverty of his existence in a kind of confessional, set against a very dark backdrop of synths and saxes in a retro futurist jazz mashup. This is not pop music!

We will be taking the Bollocks to Brexit Mini Cooper out again soon with your support. We are looking at Hampshire, Yorkshire, Kent, Essex and London but are open to offers from fiesty campaigners. Please provide your support via Bollocks. We take no prisioners.